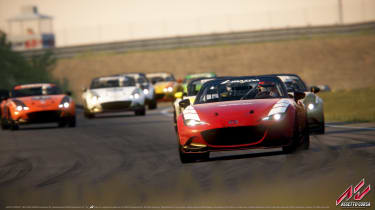 A few weeks back we tested the latest racing simulation to hit the market, Project Cars. We rated the game’s handling, graphics and unique features, declaring it a simulation ‘that does the next-gen consoles justice’.

Immediately, several of you suggested we try out Assetto Corsa. We’d held back while the game was only available in early access, but coinciding with our Project Cars drive, Assetto Corsa version 1.0 made its debut – and we’ve finally tried it.

What Assetto Corsa neatly demonstrates is the variety available in the racing simulation game market, and also developers’ different interpretations of the term ‘simulation’.

Project Cars majors on immersion. You can even drive from a helmet cam, and spots of rain hitting your windscreen clump together and roll up the glass as wind batters the screen.

Assetto Corsa isn’t quite as pretty – though with graphical options turned up to full, it’s not far off – but its physics engine is among the best we’ve experienced. Playing with a racing wheel is virtually essential, not just to optimise control but also to appreciate the accuracy to which the game replicates steering feel.

Turn into a corner and you quickly feel resistance as the tyres bite. This builds up as load increases, relaxing as you reach the limits of the tyres’ grip and push into understeer. Or oversteer, sensations through the wheel leading you to instinctively apply corrective lock. 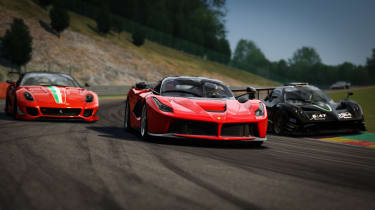 You’ll also feel tyres locking, rumble strips and should you visit the gravel trap, the depressing sensation of tyres pushing their way through the deep, resistive surface. On the steering alone, Assetto Corsa’s driving experience is addictive.

Some aspects that other games barely touch on, such as tyre deformation and accurate friction models, are impressively accurate – front-wheel drive cars will hop onto three wheels, cars will fishtail with poorly-applied lock and the classic Alfa Romeo GTA, part of the Dream Cars download pack, will lift a front tyre under power just as the real touring cars did in the 1960s.

The sounds are great too. The aforementioned Alfa has an angry, guttural bark – the unmistakable sound of a highly-strung four-pot on twin carbs. V8 supercars like the McLaren 12C emit a deep growl, and the classic Lotus 49 Grand Prix car can be identified on its unmistakable DFV bellow.

The cars are beautifully modeled in terms of aesthetics, too. That last dash of graphical fidelity is missing – the one that sees games like Forza or Project Cars replicate accurate reflections dancing over a car’s bodywork or deep, textural paint surfaces – but the cars sit well within their virtual surroundings. 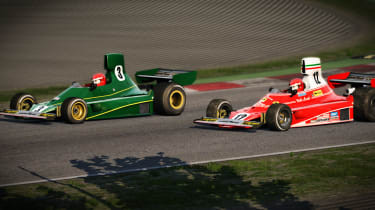 Interiors are also accurate, and should you take up the cockpit view while racing you’ll see the driver’s arms smoothly turning the wheel – and even crossing over to apply more lock should it be required.

The driving environments are convincingly rendered, whether you’re tackling the full Nurburgring Nordschleife or simply the National Circuit at Silverstone.

If there’s a sticking point it’s that these circuits, for the time being at least, lack variety. Not only are several of them racing game regulars – Silverstone, Monza, the Nurburgring, Spa – but those that remain are largely Italian. That’s to be expected from an Italian development studio, but it feels a little limiting in context of the vast wealth of tracks offered in other games.

When you’re not actually driving, Assetto Corsa presents a simple, easy-to-follow menu structure, and a wealth of car adjustment. There’s no tuning program as yet, but members of the game’s community have designed dozens of paint schemes for each vehicle. And, if you’re really finding the cars and tracks limiting, that same community does offer extra vehicles and locations to download and install. Such is the benefit of a PC racer.

Not that Assetto Corsa will be a PC-exclusive for long. The other reason we held back with our review was to wait for Kunos Simulazione’s announcement that the game will hit both Xbox One and PS4 in August 2016.

Those console players will have plenty to look forward to. While lacking in vehicle and circuits right now, Assetto Corsa is one of the best simulations we’ve tried.