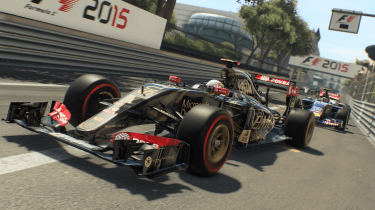 F1 2015 marks the first step into the world of next generation consoles for a Formula One game. Boasting improved graphics, a brand new handling engine, as well as all the 2015 cars, it promises a lot.

But does it deliver? Codemasters have a history of making exciting racing games and its previous attempts with F1 haven’t exactly disappointed. Big boots to fill then.

Here, Codemasters has gone for a less is more approach. Features like online co-op, career mode and classic content have all been stripped out, leaving the choice of either racing a season, a single event or doing a time attack.

It’s a big gamble and one that for the most part has paid off. The quality of what is present in F1 2015 is such that most racing fans will be more than happy with what is on offer. Still, it’s a shame to see some of the more quirky and unusual options of previous F1 games missing. 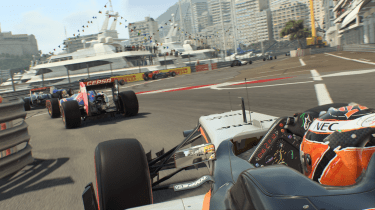 First up, a word on the revised handling and physics engine. The increased amount of torque generated by the current-gen turbocharged F1 engines is the biggest thing you have to battle with. Inexperienced drivers will find most of their initial races spent spinning up wheels and trying to keep cars in a straight line.

Using a standard Xbox One controller can make it a little difficult to modulate throttle inputs with a tiny trigger, especially when the grip from the rear tyres is so knife-edge. As such, we suggest using a steering wheel.

Still it’s nice to see a physics engine that forces you to adopt a new driving style. F1 2015 is about not being greedy and instead feeding power as smoothly as possible out of corners. Lap times can be had by being as smooth as possible, rather than being aggressive and relying on aero grip.

Force feedback does a very good job of letting you know when brakes are locking and wheels are losing traction, further immersing you in the driving experience. Weather also makes you work a lot harder and think hard about setup changes required in order to negotiate a wet race track in a turbocharged F1 car.

What impressed most was how all these changes add up to deliver a properly exciting gaming experience. On the higher difficulty settings races can’t be won by taking liberties, instead they feel earned via patience and a fast but smooth driving style.

Or at least most of the time they do. On occasion the computer controlled opponents will act all out of sorts, delivering impressive Maldonado-style moments as they ram their cars into the back of you. 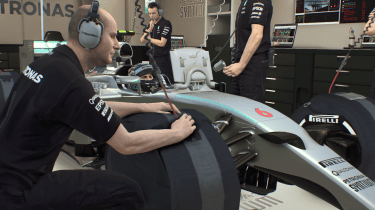 It’s irritating, as for a game that is all about polish, clunky AI can be a big let down. What’s more frustrating is that a lot of the time they can be fairly impressive, out braking you into corners and defending properly against things like DRS. The AI also adapts well to varying weather conditions and makes enough of its own mistakes to be convincing as an opponent.

Graphically, F1 2015 is definitely impressive. Tested here on an Xbox One, it combines an excellent sense of speed with a detailed and complete set of tracks and cars. A slightly muted colour palette also feels in keeping the with game’s emphasis on simulation.

We didn’t really encounter any technical issues or reduced frame rate, even when there was plenty going on on screen, which is definitely impressive. All in all, it’s a solid game engine to enjoy racing on.

Some may be searching for an even more accurate simulation, or a wider spread of content, which they will likely find with PC racing games like Assetto Corse. For those F1 fans who want something more pick up and play for their next-gen consoles, then Formula One 2015 is basically your only option. Lucky that it’s a good one.