Ford Edge Sport review - Can it compete with the BMW X3 and Audi Q5?

Ford has lofty goals for its latest crossover, but hasn't quite matched the best in class 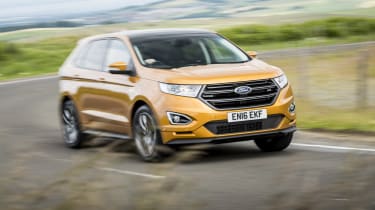 Remember the Ford Explorer? That was the last time Ford offered a car of this size on the market, more recently concentrating smaller models such as the strong-selling Kuga and the ungainly Ecosport.

On sale for some time now in the United States, Ford has executed a series of revisions for its European debut, from engines to suspension setup. The company lists cars like the BMW X3 and Audi Q5 among potential rivals - a drive will tell whether such ambitions are beyond the Edge’s grasp.

There’s just one basic engine option in the Edge and two gearboxes. The power unit is the same 2-litre turbodiesel you’ll find throughout the Ford range, which gets a single-turbocharged 178bhp if you opt for the six-speed manual transmission and a twin-turbocharged 207bhp with the Powershift six-speed automatic. All feature all-wheel drive as standard.

While the former is the same engine and transmission combination you’ll find in the Ford Focus ST TDCi, the Edge is a considerably larger, heavier vehicle, so on-paper performance is fairly modest - the manual will reach 62mph from rest in 9.9 seconds and its automatic equivalent covers the same measure in 9.4 seconds.

At a cruise both engine and gearbox combos are smooth and refined, aided by Ford’s efforts to keep acoustic disturbances to a minimum (see technical details). Work them hard however and they do begin to intrude, though like many diesels there’s little incentive to explore the upper third of the rev counter anyway. 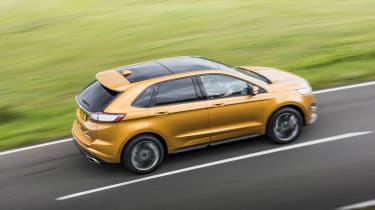 With Ford taking aim at premium marques, it’s seen fit to include a high standard of technology in Edge models. One such feature is Active Noise Control, which measures outside noise and transmits a signal of opposite amplitude to cancel it out - paired with acoustic glass, it should reduce noise significantly, though without testing a similar car back-to-back it’s difficult to discern any real improvement.

LED headlights are also available, while adaptive steering is a technology already in use by those premium rivals, adjusting the steering ratio depending on road speed. It means stability at speed and manoeuvrability at lower speeds - as little as two turns lock to lock in the city.

Ford long ago mastered the knack of making its vehicles ride and handle properly and the Edge is little different. Even in Sport trim with uprated suspension the Edge does a good job of filtering out rippled surfaces and body control over bumps and through corners is admirable for a car of this size and 1913kg kerb weight.

The steering also feels much like that in other Fords - direct and fairly meaty, though there’s not a great deal of feedback. It doesn’t quite result in the same apex-hunting precision you’d get in a Fiesta ST or Focus RS, but it’s among the better setups in this class.

Other Ford norms are also present and correct: the manual gearshift is precise (if a little notchy, though in our experience this improves with miles) but the lever itself is mounted slightly too far back, which results in some arm contortion during quick cog-swapping. The pedals are well-placed too - we can’t imagine many owners heel-and-toe downshifting, but it’s certainly possible - and brake feel is good.

And yet, it’s not a car you’d ever drive for fun. While undoubtedly capable the Edge never quite goads you into driving it harder and if you try, the relative lack of go from the diesel engine and ever-present weight means there’s never a satisfying surge of power ready to fire you out of corners. We’d also note that when you’re simply driving around town, it’s all too easy to be caught off-boost below about 1500rpm, where very little happens at all. 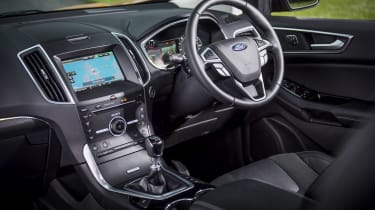 The Edge kicks off at £29,995 in Zetec trim but UK customers are more likely to step up to Titanium (for £32,245) or the top-end Sport, at £34,500. The latter was the car we drove and comes equipped with 20-inch alloy wheels, a deeper front bumper lip, sports suspension, adaptive steering and a smattering of other sporty details.

The same amount wouldn’t get you behind the wheel of an X3 - those start at £33,945 for an xDrive20d SE, though with 187bhp it out-punches the manual Ford, shaves almost two seconds from its 0-62mph time and does drive better too, with sharper handling and a more polished feel to its controls.

£32,580 is enough for an Audi Q5 in TDI quattro SE trim, though this time the Ford performs better. What it lacks is the Audi’s unimpeachable feeling of solidity (the Edge’s cabin is realistically only at Focus levels of quality), though the Ford counters with high kit levels.