A detailed and informative look through the history of Mazda's rotary cars. Is it a book worth buying? 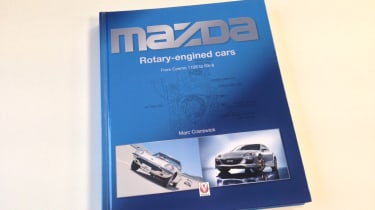 2017 will mark fifty years since the first Mazda rotary production car, the beautiful Cosmo 110S. There’s sure to be renewed interest in the concept too, as rumours persist that the sleek RX-Vision concept that debuted in Tokyo in 2015 will make production at some point.

All of which makes Veloce’s latest book, Mazda Rotary-engined cars, rather timely. Written by Marc Cranswick, it details every Mazda rotary car from that original Cosmo to the firm’s last production rotary model, the RX-8.

As you’d expect, the book also runs through brief histories of the Wankel rotary engine itself - including the automotive landscape into which it dropped, and Felix Wankel’s involvement in its creation - and Mazda’s origins as a cork-producing company in the 1920s. It then details every rotary model Mazda created in chronological order, illustrated with period and modern photography and advertisements, and offering brief nods to some of the non-rotary models that sold alongside their less conventional counterparts.

For the most part, it’s an enjoyable read - Cranswick keeps things simple but informative, and where necessary there are cited references from contemporary articles and road tests. There are references to the cars’ various motorsport entries too, including those of Mazda’s official racers such as the 1991 Le Mans-winning 787B, while significant rotary vehicles like the NSU RO80 are also given space. 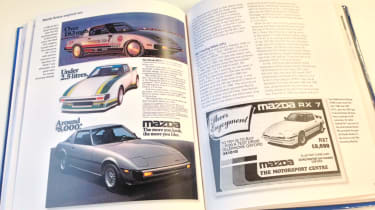 While the book boasts over 200 photographs, there’s does seem to be a slight emphasis on quantity over quality. Sourcing images for a book can be a difficult and frustrating process, but dedicating more space to quality photography and less to grainy, out-of-focus and poorly-framed owner-sourced shots (of some dubiously-modified vehicles at that) would undoubtedly have improved the look as you flip through the pages.

The presentation doesn’t help - there’s little definition between chapters, little consistency to how the images have been applied - sometimes you’ll come across a wall of text with little to illustrate it - while some creative cropping also cheapens the feel somewhat, at odds with the fairly hefty £40 cover price.

The written content is hard to fault though and it’d be a valuable asset to anyone who considers themselves a fan of either rotary engines or Mazda as a brand - not least for the occasional brand-new discovery you’ll make. Who knew, for example, that Mazda made a rotary-engined bus, or a prototype RX-7 with an aluminium body?