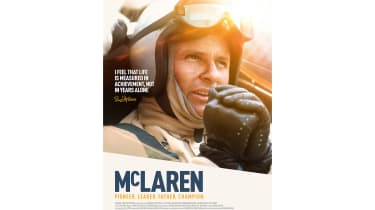 Giants of motorsport Ayrton Senna, Niki Lauda and James Hunt have been subject to cinematic representation in recent years. Now it’s the turn of Bruce McLaren, and not before time, we say.

The documentary McLaren comes to us from Universal Pictures and director Roger Donaldson (The World’s Fastest Indian). It hits the screens at selected cinemas on Thursday, May 25th and the inopportune timing won’t be lost on many evo readers – McLaren Honda’s performances in F1 certainly aren’t pulling fans into the grandstands.

The story couldn’t be more different for McLaren Automotive, however. Since launching an impressive but flawed supercar in the form of the MP4-12C in 2011, the road-car division at Woking has developed and honed a range of supercars that compete at the apex of the industry. It’s a development that has even Ferrari rattled, but we’d wager a significant proportion of petrolheads don’t know too much about the New Zealander for whom this success is a legacy.

McLaren is a patchwork of archive footage and often amusing, always poignant interviews with the fanatical band of mechanics that worked alongside Bruce McLaren as he built and raced F1 and Can-Am cars during the 1950s and ’60s. It’s cut with the occasional recreation scene (which won’t be to all tastes, but the presence of a McLaren M8D will send shivers down your spine) and though not the slickest production,  the remarkable subject matter means it doesn’t need to be. Bruce’s intuition as to what made a racing car fast, and his determination to see that vision made metal, all while coming across as an exceptionally sound chap, is humbling, and it comes through beautifully in the film. Emerson Fittipaldi, Mario Andretti and Jackie Stewart are also on hand to hammer home what a unique personality he was, as if we needed the endorsement. 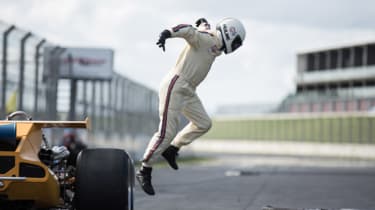 The story is bookended by McLaren’s upbringing in New Zealand and his death while testing the M8D at Goodwood, and we’re duly treated to McLaren the driver and McLaren the engineer. Both were sensationally talented, to the extent that aged only 22, Bruce became the youngest F1 winner in history by taking the chequered flag for the works Cooper team at the US Grand Prix. Seven years later, the man who as a boy had overcome Perthes disease to drive racing cars was fielding his very own F1 machinery, and in 1968 guided the M7A he’d designed and engineered to victory at Spa-Francorchamps. It would be the first of 182 World Championship wins for the team and came as the fledgling operation was effecting two seasons of near-total domination in the Can-Am series. There’s some superb footage of the cars dicing with Chaparrals and Lolas, Bruce and Denny Hulme at the wheel.

This film is more sedate than Asif Kapadia’s Senna, partly because McLaren wasn’t as divisive a personality as the Brazilian who brought home three F1 world titles for the team that grew from Bruce’s labours. Like Senna, however, the pathos of a brilliant life cut so wretchedly short makes for nostalgic affair laced with glory. You can’t help but sit at times transfixed in awe of Bruce and his achievements, and men like him are why we love cars. McLaren should be regarded as essential viewing.