VW’s Up GTI is already a favourite of ours. Can Milltek’s upgrades improve it further? 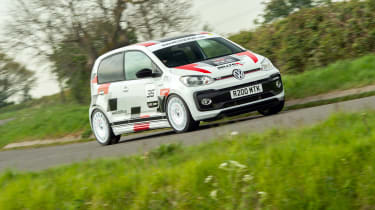 It’s long been a theory of mine that, far from being a reason to leave well alone, great cars that you really love and enjoy driving often tempt you into a degree of modification. Not radical changes, but considered tweaks that turn things up to give you a bit more of what you want.

Exhaust maker Milltek’s take on the Up GTI might look as though it has been taken several steps too far, but don’t be fooled. Beneath the war paint, or rather the vinyl wrap, lies a car that has been intelligently and comprehensively uprated without trashing the standard car’s core qualities.

Where to start? Well, as it’s a Milltek creation it seems only fair to start with the exhaust system. Costing £500 and running from the cat back, this larger-bore system takes the restriction out of the standard small-bore pipework. An attractive titanium-like finish to the tailpipe gives a subtle clue to those following, as does the exhaust note’s appealing drawl, which is deeper and a little more vocal than standard. With wide throttle openings it’s amusingly reminiscent of a distant 993 GT2, yet doesn’t become too boomy at motorway speeds. 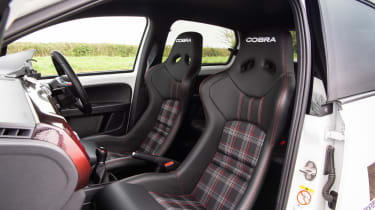 Coupled to a Stage 1 JBS remap (£250), the Up’s 1-litre turbocharged triple develops an additional 32bhp and 25lb ft, bringing the totals to 145bhp and 172lb ft. Those are very useful gains in a 995kg car, and noticeable right the way through the rev range. The standard car responds generously to initial throttle inputs and majors on in-gear tractability, but Milltek’s car has more muscle in the mid-range and greater urgency at the top end, with a genuine appetite for revs that’s missing from the standard motor.

The most visible changes centre on the wheels, tyres and suspension. The GTI has always looked generously shod – a feeling backed up by the Milltek car sticking with 17-inch rims, in this instance £999-worth of OZ Racing ‘Rally Racing’ wheels. They’re wrapped in Nankang NS-2R tyres, which I have to say wouldn’t have been my first choice, but actually prove to have plenty of bite combined with progressive breakaway when you do reach their limit of traction or lateral grip. In the dry, at least.

They’re a smidge wider than standard – 205 section versus the standard car’s 195 – which accounts for the arch-filling stance, and at circa £75 per corner they’re reasonably priced. Of all the mods you can do to an Up GTI, fitting it with performance tyres instead of more standard Goodyear EfficientGrip rubber is a no-brainer. 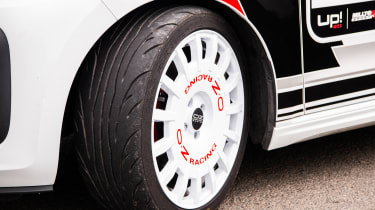 Milltek has then gone a stage further, replacing the standard springs and dampers with KW Variant 1 coilovers. The £894 kit allows the car to be lowered considerably; a little too far in the case of this aggressive stance-enhancing set-up, as the fractionally fatter tyres foul the arches under compression. We didn’t have time to make ride height adjustments, but a modest lift would solve the fouling issues.

Interestingly, as the standard Up can be a bit lumpy at low speed and rather lively over bumps when you’re going for it, the KW’s increased control actually brings a small improvement to ride comfort at urban speeds, while its composure at more committed velocities is much improved. Crucially, though the steering remains light, once you get dialled in there’s a greater sense of connection, which is then compounded by having tyres with a more malleable limit.

Increasing road holding may go against the growing belief that less grip equals more fun, but much like a Toyota GT86 comes alive when you ditch the brittle-feeling eco-friendly tyres, so the Up is even more fun to hustle down a twisty road when it has decent tyres underneath it.

The one thing that the Up GTI really needs is switchable ESP, but sadly nobody seems to offer it. From what I’ve found on the interweb you can hook a laptop up to the car’s data port and partially disable it, but it’s a bit of a hack, needs doing every time you start the car and even then doesn’t switch it off entirely. Search for @volkswizard if you’re curious. 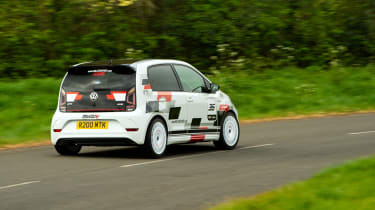 This is a shame, for the ever-vigilant ESP rather negates the full dynamic benefits of stickier tyres and tauter suspension. Indeed, with the system initially having less cause to trigger thanks to more grip and less body roll, when you do eventually induce wheelspin or a slide you’re rather further outside the ESP’s calibrated comfort zone than it would like, which leads to a more abrupt intervention when the car realises what’s happening.

In line with a classic rule of Man Maths, Milltek’s most costly modification is also one of the most seductive: a pair of really rather wonderful Cobra Nogaro front seats. Trimmed in black leather with cushion panels in the same ‘Jacara’ tartan material as found in the normal GTI, they really look the part and are nicely supportive without being too track-focused. They really do lift the interior, while also sitting you lower in the car. At over £1500 (that’s roughly ten per cent of the Up GTI retail price!) they’re an indulgence, but sorely tempting. Especially if you intend to commit to long-term ownership. Cobra’s clever seat design means you can mix and match seats and bases in both fixed-back or tilt versions, so they’re equally suitable for three- or five-door GTIs.

I’ve never found the standard stoppers wanting on the road, largely because the fun of driving the GTI is carrying speed rather than standing it on its nose, so they rarely get used intensively. Milltek does a lot of trackdays with this demo car, but still they’ve left the brakes alone, which confirms my sense that they’re more than up to the task. 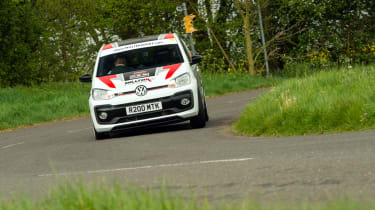 It’s always hard to justify modifications to a modestly priced new car. Especially when it’s a car such as the Up, which is perfectly pitched to offer maximum fun in a simple, stylish, everyday useable package. Taken as a whole, if you applied the Milltek car’s suite of modifications to a new GTI it would push the price through the £20k barrier. However, if you assume used examples will soon be around the £10k mark it’s easier to justify the remap, exhaust and a set of decent tyres. Having lived with a standard Up GTI as my Fast Fleet long-termer for the last 12 months I can say with absolute certainty that, were I to write Volkswagen a cheque so that I could keep the car, these would be the tweaks I would do like a shot.

Like all projects, how far I’d go beyond that is entirely budget dependent, but there’s no doubt that far from flagging up the flaws of an underwhelming standard car, Milltek’s well-judged mods bring the best out of a cracking little car. If only someone could find a way to make the infernal ESP system turn a blind eye, it would be just about perfect.