The classic Morgan roadster now has a Ford V6 instead of a Rover V8, and very good it is too 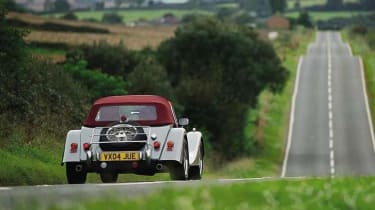 You could be forgiven for thinking that The Morgan Motor Company has been wrapped up in the development and productionisation of the Aero 8 for the last few years to the exclusion of all else. Not so. The traditional model, once the Plus 8, now the Roadster, has been re-engineered too. The demise of the Rover V8 could have a left a gaping hole but Morgan has replaced the venerable lump with a more modern unit that replicates its gutsy delivery and has almost as much character. It's the 3-litre Ford Duratec V6, a fine engine that does service in the Mondeo ST220.

You'd think that substituting a 3-litre V6 for the 4.6-litre V8 would leave the new Roadster short of grunt but the V8 only pumped out 220bhp and 260lb ft. The all-aluminium Ford V6, with four cams and 24 valves, manages 223bhp and 204lb ft, which ought to be more than adequate given that the partially ash-framed, aluminium-bodied Roadster weighs a mere 940kg, or about the same as a Ford SportKa.

As Ford designed its V6 to be installed transversely there were some technical hurdles to overcome. Morgan created its own bellhousing to fit the engine longitudinally and couple it to the Jaguar S-type five-speed manual gearbox, and Ford re-mapped the engine. Lift the gullwing bonnet and the engine's transverse origins are betrayed by the intake plenum being hung over the right-hand bank of the vee, but the V6's compact length and reasonable height meant that no modifications to the surface bodywork were required.

Sitting on its fat-rimmed wire wheels, attractively finished in steel grey, the Roadster is virtually indistinguishable from the last of the V8s. Clamber in and the leather-lined cockpit with its glossy veneer facia shows a few signs of modernisation - like the multi-function stalks on the steering column - but you know you're in classic Morgan territory. Beyond the squat screen with its dinky triple wipers stretches that long, tapering bonnet with its regiments of louvres, flanked by the flowing wings. Twist the key and the V6 adds a soundtrack that isn't just on a par with that of the V8, it's arguably more fitting. The V8 woofle was glorious but a tad incongruous, whereas the languid beat of the V6, with its faintly tappety-sounding overture, is somehow more British - if you didn't know better you could mistake it for a refined, Sixties straight-six.

It might lack the V8's outright torque but the V6 delivers plenty of low-rev push despite the peak arriving at 4900rpm compared with 2600rpm for the eight. You can thank the Roadster's light weight for that, and the fact that much of the V6's torque is available much lower down than the peak suggests. It's very happy to operate below 5000rpm, which seems like a natural upshift point even though it will rev to 6000rpm with increasing vigour, and you tend to cruise around on the torque because that's when the V6 sounds its best. The gearshift is brisk and satisfyingly mechanical in a slick, measured way, and the ratios are well chosen. Morgan claims a startling zero to 60 time of 4.9sec, which seems a tad optimistic, and a top speed of 134mph, which would be very noisy indeed if it is achieved with the hood in place.

The classic, bygone era surroundings and aural accompaniment are matched by the dynamics. On anything less than baize-smooth asphalt the Roadster is hard work, its ride revealing bumps I'd never noticed before on familiar roads that I'd considered pretty well surfaced. You learn too much about the detail topography, the thin wood rim of the Mota-Lita wheel moving constantly in your hands, while the rear axle takes especial exception to large transverse ridges. Despite appearances, this isn't a car in which to ply the narrow highways and by-ways of leafy Britain.

The handling is equally colourful. There's plenty of grip from the 205- section Yokohamas and they resist wheelspin and oversteer effectively at roundabout speeds but the non-assisted steering, initially keen, gets quite weighty once you start winding on more than five degrees of lock. On a racetrack you might feel confident in exploring the limit of grip; on the road there's too much going on with the steering weight and the chassis' reaction to bumps to wish to maintain much more than a brisk pace. That said, if it's a traditional Morgan you've set your heart on and you were wavering since V8 production ended, waver no longer because the V6 model is a worthy successor and a character in its own right.