New entry-level Z4 has a Brit-built engine. It's good, too 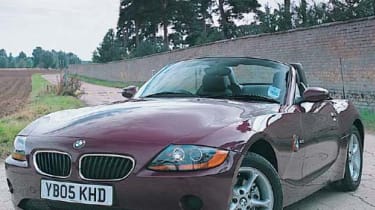 BMW is sometimes lambasted for having done the dirty on the British car industry (i.e MG Rover) and hence the workers within it, but that's forgetting that it employs thousands of Brits building Minis and Rolls-Royces, and, what's less well known, thousands more building engines at its Hams Hall factory, near Birmingham. Very fine engines they are too, especially the 2-litre all-alloy unit you see in this new entry-level Z4. I have a confession to make. When I climbed into this car I didn't know what the powerplant was, except that it was a 2-litre. You're right, I should be drummed out of the Guild of Motoring Writers (though I'd have to join it first). Even after I'd fired the Z4 up and driven 15 miles, I was still wondering, and if I'd had to put money on it, I'd have said a baby straight-six. It really is that smooth, with a decent amount of torque and a proper BMW growl when extended. And it's not that daft a notion, because the 2.2, which is the next rung up the Z4 ladder, is a six. But a humble four-pot it is, albeit one with VANOS and Valvetronic, the BMW systems that constantly adjust valve timing and lift respectively. Power and torque figures aren't spectacular, but there's a nice spread of power and a pleasing top-end zing to the delivery. It's no hardship to row it along with the standard six-speed manual box. OK, it would be nice to have a bit more grunt. Even with the Dynamic Stability Control switched off and the throttle slammed into the carpet, there's barely enough to break traction. But adapt a more 'grown-up' driving style and the Z4 flows along nicely enough, with bags of grip from the 225/50 R16 Bridgestone Potenzas. If only there was a bit more connection with the road; it never quite feels as keyed-in as it obviously is. The cabin's a bit bare and plasticky, but hey, this is an entry-level sports car. You don't even get a powered roof (you have to pay an extra £710 for the SE version if you want that) but I could easily live without it. What I would like, though, is to trade a little of the grip for a little more feel, and tease out rather more of the engine's growl. Then I reckon it'd be an entry-level, Brit-engined cracker.