Toyota's hot hatch gets a supercharger 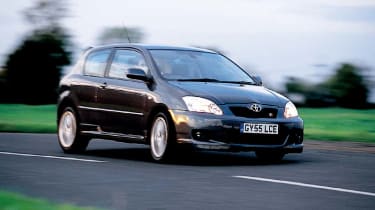 Nineteen-thousand nine-hundred and ninety-five shiny pounds. You could buy an awful lot with that. Or you could buy the Toyota Corolla Compressor. The Corolla T-Sport is about to be decommissioned thanks to emissions fiends, so as a final fling Toyota has bolted a supercharger to 250 examples and given them a name that sounds like a vacuum cleaner.

The blower's addition to the VVTL-i sees power rise by 26bhp but worryingly it reaches its new zenith a further 400rpm around the white-faced rev-counter. However, the real problem with the T-Sport's engine has always been a lack of torque. Although the supercharger should help with this, a maximum figure of 158lb ft at 4000rpm won't exactly leap out at you in The Knowledge. Ride height has been lowered by 15mm and the springs stiffened to complement the power hike.

Positive initial impressions include a good, mechanical-feeling gearchange, linear response to the brake pedal and a decent driving position behind the red-stitched wheel.

On the cut-and-thrust lanes of middle England it's the motor that lets the Corolla down first. Go to overtake from 30mph in second and the Compressor gives an initial surge as you floor the throttle, but that subsides quickly and you're left watching the rev-counter until it passes 6000rpm, whereupon it starts to sound and feel like it's coming to life. Unlike the Civic Type-R's VTEC, it isn't aurally seductive, sounding harsh and unhappy at high revs.

And so to the twisty bits. It's certainly better than the standard car and stays composed up to about seven-tenths, but ultimately there's no disguising that there's still quite a soft chassis as a starting point. The steering feels like there's too much sproing and rubber in the system and as pace increases it leaves you without any useful information. You can persuade the back end to play but it hardly feels like second nature.

Hot hatch antics in the Compressor feel rather like ragging a hire car - engine screaming, chassis surprised and not entirely happy with the pace it's finding. It's an experience that's pleasurable in a Hertz because you know you can dump the keys and run away at the end, but not so nice when you've coughed up the price of a new GTI.