It's a coupe, it's a cabrio, and it's surprisingly good 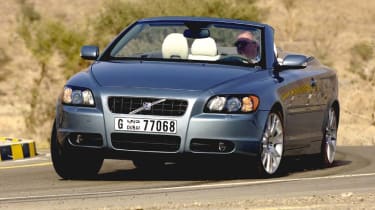 Last April it was. In Sweden, at Volvo's test track, an applecart was being upset. When a carmaker invites you to try a late prototype of a forthcoming car, gathering said car at its own track with some carefully-selected rivals, it's only right to be suspicious. Especially when said car turns out to be the best of the lot, with a dynamic fluidity not approached by the others. But it happened. Opportunities for massaging the result were minimal, though. Volvo's new C70 has only three real rivals: the convertible versions of the Audi A4, BMW 3-series and Saab 9-3. And maybe the Mercedes CLK in its two body-forms, except that it's too expensive to be taken seriously. Those three real rivals were at the track, souls laid bare. Then there was the track itself. Fast bends, fiendish esses, mid-corner bumps, ruts and camber-shifts. It was a good track, representative of real roads of the sort we like, the sort of roads that might flummox an A4 and set a Saab shaking, but that should bring out the best in a BMW. Which they did. But the Volvo was better. It really was. This new C70 is very different from its predecessor. It's a bit smaller, for a start. Logically it should be a C50, but Volvo needed to emphasise how the new car takes over from the old one. That previous car, available as both coupe and convertible, was based on the hefty Volvo 850 platform and built by a Swedish outpost of TWR. The new one is built on the biggest stretch yet of the Ford Focus platform and is a coupe and convertible rolled into one. It's the first coupe-cabriolet in this size class, in fact - all the others have conventional fabric roofs. Coupe-cabriolets, up to now, have had two-piece folding roofs. That's because the roof covers either just two seats or two seats plus a pair of joke chairs. If the latter, the roof is long and has to be stowed under a similarly long and invariably ungainly tail. The C70 does it differently. Its roof is in three sections to make it long enough to cover a proper four-seat interior, yet short enough, when stacked and stowed, to allow a properly-proportioned tail. The roofline in coupe mode is much like the old C70's, with the two transverse join lines the only obvious clues to the chop-top transformation which can be completed 30 seconds after pressing the vital switch. The transformation is like something from the Cirque du Soleil. The bootlid reverse-flip opens (as usual in a CC), and as a worryingly complex mass of levers and pipes and wires and tensioning cables moves around, the three roof components jockey for position to end up in a sandwich with the rear window in the middle, the front section on top and the middle section at the bottom. This all hangs above the boot space before descending into the boot to be sealed in by the boot-lid. It's a fabulously intricate and complex operation, and I only hope it continues to work properly for the couple of decades that Volvos are supposed to last. Pininfarina devised it, and also makes the C70 for Volvo at a new operation in Sweden (the first time it has had a factory outside Italy). There's a price to pay, though. The stack of roof parts occupies a lot of boot, halving its volume, and access to the space that remains would be near-impossible were it not that you can press a yellow button on the boot ledge and cause the whole stack to rise by eight inches. That's clever, but it also takes time and access is still tight. Now, nine months (a suitable gestation period) after that first encounter, I'm in Dubai, driving a production C70. The panel gaps and trim textures are massively better, as expected, but is that unexpected element of magic still there? This is a T5 turbocharged version, 2.5 litres, 220bhp, six-speed manual (a five-speed auto is optional) - broadly the same engine as in the Focus ST but with less aggressive tuning. You can also have a naturally aspirated 2.4 with 170bhp, and later in the year a turbodiesel will complete a five-pot trio. So, that magic... Let's say first that the C70 doesn't feel like a Focus, nor was it ever going to with no roof and a 1711kg kerb weight. But the structure, roof down, is said to be twice as stiff as the old C70 convertible's, so it has to be a massive improvement. And it is, with less shudder and shake than any of its rivals, and a wonderfully smooth, supple gait. Yet the steering is responsive enough to make this weighty car good fun in the bends, and the engine is as smooth as an engine can reasonably be. Punchy and revvy, too, with but a fraction of the turbo lag that once plagued any T5-badged Volvo. So far the magic has been maintained. This C70 is just a properly-finished version of the car I first drove. A touch of slackness in the helm and a slight tendency for the tail to steer the nose are the only giveaways of the structural compromise that is a roofless car. So, up with the roof. Wind noise? Pretty good, not perfect. Driving dynamics? It's a proper coupe, with sharp, slack-free steering, great traction and grip, and a touch more throttle/balance interactivity in a corner. The C70 does what it needs to do in both its modes. Not only that, but it's well-finished outside and in, has a great stereo which alters its sound balance to suit top-up or top-down motoring, and you can't slash its roof. BMW's next 3-series convertible has a possibly unexpected task on its hands.