645lb ft of torque puts plenty of wind in your hair 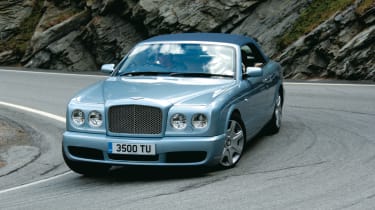 It’s a sobering thought that you could almost buy two Continental GTs for the price of just one Azure, Bentley’s flamboyant new flagship convertible. That said, at £222,500 it’s still £8390 less than when the previous-generation Azure last sloped out of a dealer’s showroom some three years ago. The earlier Azure had the appearance of a motorised Gucci loafer – and handling characteristics to match. So it tended to be bought by people with absolutely no interest in driving.

Since its departure there’s been a quiet revolution going on in the Bentley engineering department under the direction of Dr-Ing Ulrich Eichhorn (the gifted engineer poached from Ford by VW after the last car he engineered for Ford, the brilliant Focus, comprehensively eclipsed the then-new Mk IV Golf). Even so, the Azure has been one of the toughest assignments yet for Bentley’s new chassis guru.

The new Azure is slightly longer than the four-door Arnage on which it’s loosely based, with the body being all-new from the A-pillar back. The shallower windscreen is raked further back and the B-pillars have disappeared completely, resulting in the side-glass being completely frameless. The overall effect is of a lavish, rakish convertible that looks strikingly better than the Arnage roof-up, and roof-down exposes the sumptuous new full-four-seater interior to the outside world.

Peer underneath the car and you’ll see signs of the engineering that’s gone into the Azure to restore the body stiffness lost during the decapitation process. There are two cross-braces, made from carbonfibre (the 21st century’s wonder material’s first appearance on a roadgoing Bentley), one linking the deeper sills to the front subframe, the other connecting the sills to a reinforced rear subframe. The result is a 300 per cent increase in stiffness compared with the previous Azure, to the point where the new car is as near as dammit as stiff as the Arnage. The result is brilliant refinement and a real sense of robustness when driven over broken tarmac.

Blasting along some Italian autostradas with the hood up showed how far the Azure has progressed. Wind noise was surprisingly low, only becoming apparent at speeds above 110mph, while the nose of the car felt far more agile than that of any 2.7-tonne car has any right to. And with the venerable 6.75-litre V8 pumping out 450bhp and 645lb ft of torque, performance remains on the idiotic side of brisk for such a heavy car (5.9sec to 60, 14.4 to 100). Top speed varies depending on whether the hood is raised (174mph) or lowered (166mph), the transition taking just 25 seconds (apparently Bentley had it down to 22sec but felt that part of the folding process looked too hurried to be completely graceful so slowed it down again).

This car is a worthier flagship for Bentley, with a sense of purpose to the driving experience that was completely absent in the previous Azure as it wobbled its way around the world’s glittering hotspots. The new Azure is the sort of car we really shouldn’t like at evo yet we do. We’ll probably like it even better with a metal roof on it though. The resulting Coupe should make the perfect replacement for the illustrious Continental R.