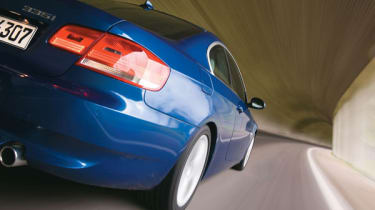 Before jumping in, it's worth having a stroll around the coupe's perimeter because it's a very handsome car indeed. It's not a radical shape - there seems to be less of a Bangle influence than ever - but the nose is much more aggressive, the roof is lower, and the rear looks slightly elongated and almost shallow, with a whiff of 8-series about it. The overall shape hunkers back towards the driven wheels and is a significantly more svelte proposition than the saloon. As I stand next to it, I also can't help but mentally add a couple more tailpipes at the rear and imagine some gently swollen arches, a discreet bulge in the bonnet and a more menacing grille. It's got the makings of a very good M3.

Get in, close the frameless door, and a small mechanical arm whirrs out over your shoulder proffering you the seatbelt like a considerate rear passenger. It falls so easily to hand that both photographer Dave Smith and I caught ourselves saying 'thank you', which would no doubt please our mothers but was a little worrying nonetheless.

Prod the almost utilitarian starter button (no red like Honda or glowing glass like Aston) with your digit of choice and the 302bhp twin-turbo 3-litre engine spins into life. The last turbocharged petrol BMW to come to the UK was the 2002 Turbo, back in the mid '70s, so why have the men from Munich suddenly reverted to forced induction in the year 2006? A desire for cylinders of a certain size is the answer. BMW sees 500 to 550cc as the optimum capacity for each cylinder in each of its engines. However, in its view a V8 is not suited to the character and size of the 3-series (the M3 will be the exception that proves the rule), so in order to increase the power available in a 3-series they had to introduce a turbocharger to the straight six.

This decided, BMW then set about the task of producing an engine that possessed all the increased performance gains of forced induction whilst retaining the qualities of the best naturally aspirated engines. As a result there are two small low-inertia turbos, each one doing its stuff on three cylinders while keeping lag to an absolute minimum.

High-precision injection was also seen as vital to the reintroduction of turbos to BMW petrol engines. Accordingly, piezo injectors have been employed for their ability to provide very accurate fuel delivery, meaning greater fuel efficiency - something BMW is starting to take very seriously - without compromising performance.

But what's it like when you actually get to exercise your right ankle muscles? Well, if there are any purists out there worried by the thought of turbos on a petrol BMW, don't be. As we make our way up into the Austrian Tyrol there is no aural evidence of the Puffing Billies, yet squeeze the throttle from even the lowest revs and the engine simply swells with torque - 295lb ft of it to be precise.

In fact, there's so much urge low down that it's easy to get into a fast-paced rhythm where you're unconsciously changing up at just 4000rpm. But resist the temptation to hook another cog in the wonderful manual gearbox (light but mechanical, just a joy to use) and you'll discover that the upper reaches of the rev range are just as impressive. The 335i climbs with undiminished energy up to its 7000rpm peak and keeps on giving all the way there. It's as though the turbos are merely on hand to give the normally aspirated engine a bit of a piggyback through the foothills of the rev range.

The new engine has retained the wonderfully cultured sound of the naturally aspirated 3-litre, but it's now a deeper, gruffer melody. It's a tune that suits the less frantic character of the motor. Well, I say less frantic, but there's nothing particularly calm about a 5.5sec 0-62mph time which, combined with the engine's flexibility, should give E46 M3 owners something to worry about.

It's no great surprise that the chassis can live with the power. The 335i is wonderfully balanced when you get to string a few corners together. In the wet you can happily toy with the easily breakable grip at either end, meaning there's hours of amusement. In the dry there's tenacious turn-in, which gives you the confidence to chuck the 335i into a corner and then use the throttle to dictate the nuances of your line. It's unbelievably friendly.

The Dynamic Traction Control works well, as ever, particularly when it seems half an Alpine river has emptied itself onto the road. But when you disable the stability control completely you long for a limited-slip diff instead of a spinning inside rear, particularly with the endless hairpins of our test route. The optional Active Steering was good on those hairpins, but there is still the odd occasion where you find yourself darting towards an earlier apex than the one you thought you'd aimed for. I'd stick with the more feelsome standard rack unless I lived in the mountains or a multi-storey car park.

The only question mark that will have to remain hanging over the 335i for now is whether it can avoid the trademark small-BMW trait of a rear suspension that, at speed, bounces around like Tigger. Roads more rippled than those of the launch will be needed to determine that.

The new 335i was definitely worthy of the sleepless nights. It has provided us with a fantastic new engine that brings new meaning to the term 'useable performance'. Even better, it has set the bar at such a high level that the next M3 will have to be quite brilliant to beat it.