A Dutch, pocket-sized Zonda, covered in plane-related details. There's nothing quite like the Spyker 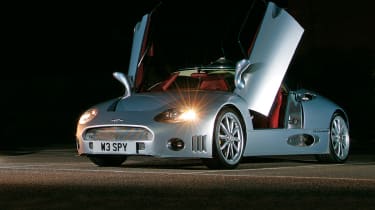 The mid-engined Spyker C8 Laviolette is anything but sensible. For such a comparatively compact car, its presence is colossal, a hyperactive mélange of scoops, vents, 19-inch ‘aeroblade’ wheels, upswinging doors and conspicuously crafted body jewellery. Inside, the aesthetic onslaught is even more intense, spearheaded, without a doubt, by the naked and gleaming gear linkage that runs almost the entire length of the cabin, though the equally exposed pedal assembly, seemingly hewn from solid aluminium, runs it a close second.

Like the Bristol Fighter, this is no wannabe Ferrari. To the uninitiated, it looks more like a renegade concept car. Added to which, it’s fantastically rare. Powered by a tuned Audi 4.2-litre V8 developing 400bhp mated to a six-speed Audi transaxle, the drivetrain, in contrast, is rather run- of- the- mill but ideal for the job; compact, light and muscular. Besides, there’s nothing wrong with having an Audi engine. So does the Lamborghini Gallardo.

The ultra-stiff chassis is manufactured from aluminium sheet and extrusions and clothed with hand-beaten aluminium body panels, faithful to the original design drawings of Maarten de Bruijn, who built the first Spyker prototype during the ’90s. The front-hinged tilting doors have an extremely strong, lightweight single point aluminium hinge while the fully-opening front and rear body sections reveal a plethora of delectable engineering details, including fully-adjustable front and rear suspension in stainless steel with unique Spyker-made components. Massive AP brakes with six-pot callipers provide stopping power.

The original Spyker company was formed in 1898, when Jacobus and Hendrik-Jan Spijker, coach builders in Amsterdam, pioneered their first Benz-engined motor car, and won immediate acclaim for the craftsmanship of their bodywork. Early Spykers included the 1903 60HP Grand Prix racer featuring the world’s first six-cylinder engine as well as permanent four-wheel drive, with Spyker models enjoying particular success in Britain and the Dutch East Indies. The last Spykers from this era were built in 1925, after which the company ceased trading.

The Spyker name and spirit was resurrected in 2000 by Dutch tycoon Victor Muller. The new company, based in Zeewolde, Holland, employs just 60 people, one of whom negotiated some deft product placement in the film Basic Instinct 2: Risk Addiction, in which Sharon Stone drives a C8 Laviolette, just like Harry on the way here. Although I would hope he had his legs firmly shut.

Despite the C8 Laviolette having a fixed roof, its lightweight aluminium spaceframe was designed from the outset to meet the requirements of an open-top roadster (the C8 Spyder) and is therefore extremely rigid; the hard roof makes it stiffer still. The doors scissor skywards with a smooth, well-damped action and getting in requires only marginally more athleticism than with the Bristol.

If the quilted leather lining of the cabin evokes Spyker’s aviation beginnings (which peaked in WW1), the arrays of toggle switches and watch-like dials and gauges on the turned aluminium dash leave you in no doubt. These aesthetic flourishes cost extra, by the way: £2138 for the wall-to-wall quiltedness, £3454 for the aluminium dash. While we’re talking money, a switch that makes the exhaust quieter if you don’t want to attract the attention of the noise police costs £681.50 and the 19-inch Aeroblade wheels £4277.

If you’re serious about Spyker-ness – and, let’s face it, if you’ve set aside £192,465 for the standard car, you’re going to be – the Aeroblades are a must-have because, like the steering wheel (which, in all honesty, looks as if it’s been pinched from a Ford Model T hot rod), they mirror the propeller motif of the company logo and reinforce the company message. It has one, too: Nulla tenaci invia est via - ‘for the tenacious no road is impassable’.

Then again, you can always pretend you’re about to take off. If fact, if you want the Spyker to move at all, you have little choice. Starting the engine requires first that you flick the red cage off one of the dash-mounted toggle switches, click it to the on position, then press the starter button to rouse the 40-valve V8. You can forget all about this engine’s satin-smooth, whisper-quiet reputation. In the C8, mere inches behind the driver’s head, it sounds loud, raw and raucous enough to strip paint off walls, the leaves from the trees and the colour from your passenger’s cheeks. The Spyker is about as civilised as a bear in a trap.

Extra soundproofing isn’t an option, or desirable. It would taint the C8’s excellent power-to-weight ratio. If you want evidence of the serious intentions with this car, here they are. The Spyker weighs just 1275kg. Suddenly, the Audi powerplant’s 400bhp looks a whole lot more exciting.

And it is. At anything below 90mph the C8 doesn’t appear to have any suspension at all. It makes motorways feel like B-roads and B-roads feel like you’re clamped into a particularly vigorous destruction test-rig. The meatily-weighted unassisted steering adds to the sheer physicality of driving the Spyker but its precision and directness make fast progress a rewarding, if slightly exhausting, experience.

But it’s one worth sticking with. Despite the hard ride, it quickly becomes clear that not only is the C8 wonderfully well balanced but has a remarkably stiff structure. All right, it appears to lack some finishing touches (a few fresh-air access points where doors meet glass meet body, for instance) but the half-anticipated shudders and shimmies simply don’t materialise. It corners hard and accurate irrespective of the road surface; there’s not a trace of nervousness through the steering or the seat of the pants. All right, the unservoed brakes are stupendously heavy – more on this in a moment – and the steering is no fingertip affair. But then, this is a car for purists and First World War bi-plane fans.

At least the uncompromisingly firm ride keeps the body under such meticulous control that you feel very much one with the car; yes, there’s some harshness, but very few unwanted jolts. And such is the ease with which the chassis handles 400bhp, there isn’t much in the way of gratuitous tail-wagging fun to be had – on dry roads at least.

The C8 is an odd but curiously intoxicating mixture of fantasy and hardcore. In the sense that it looks and sounds sensational, goes like stink and handles with track-car-aping acuity, it presses all the right supercar buttons. But it goes beyond that. The interior, for one, is pure motor show concept car; startling on first sight, sure to drop the jaw of anyone you show it to but quite staggeringly impractical. The handbrake, for instance, is best operated by a co-pilot. From behind the wheel (no airbag, of course) you can’t see the front of the car at all. And as for the turning circle, debris orbiting a small moon scribes a tighter path.

Then there are those brakes. Hard pads are great, yes, but the basic idea, as I understand it, is for them to stop the car. If you can summon the sort of pressure at the ball of your right foot that would halt a runaway railway carriage, they do.