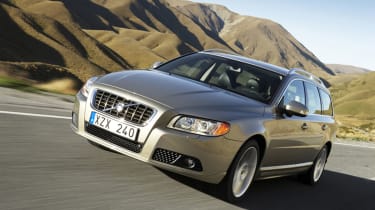 Volvo’s ambitions for the T6, the top model in its new V70 range, are much reined in compared to those it held for the previous V70 R. That car was pitched as a rival for the BMW M3 and its ilk, its 300bhp five-pot turbo engine driving through an all-wheel-drive chassis with adaptive damping. This complex, multifaceted system, dubbed Four-C, is still available as an option on the T6, which introduces Volvo’s new 281bhp turbocharged 3-litre straight-six, but that power figure, albeit a healthy one, is clear indication that the new 414bhp M3 is not in this car’s sights.

The V70 has also moved up a class size, now being based on the larger S80 rather than the S60, yet it successfully hides its size with a chamfered nose, kicked-up rear bumper and short overhangs, and if you dip into the options you can create a T6 that looks almost as cool as the old V70 R. The two main packs are ‘Lux’ – think Ghia X – and ‘Sport’, which is more our bag, bringing 18in five-spoke alloys, a rear spoiler, Four-C and, intriguingly, adjustable power steering assistance offering three weights.

The T6’s new straight-six uses a single, twin-scroll turbocharger with two inlets, each fed by three cylinders, rather than one entry point being fed by all six cylinders, and Volvo claims it offers the same snappy response as a twin-turbo set-up. Peak torque of 295lb ft is delivered at just 1500rpm, peak power at 5600rpm. The transverse engine is mated to a six-speed auto (there’s no manual option) and, with Four-C, the Haldex-type four-wheel drive uses an electronically controlled clutch pack to distribute torque between the axles.

Ahead of the gearshifter are buttons to set the Four-C to Comfort, Sport or Advanced. On the V70 R the distinctions were very obvious, Advanced making the car punishingly firm. There’s nothing like the same step change in the T6 – the ride is very good in the default Comfort setting, mildly jiggly in Advanced – but you don’t really expect it, the clue being seats with little real lateral support, so you wouldn’t be in a position to exploit a keener chassis anyway.

The V70’s handling is safe rather than inspiring, with good turn-in and grip but little in the way of adjustability or steering feel. The steering weight is a little light too, but delve into the on-board computer and you can firm it up a fraction, which makes its responses cleaner and quells the slight distraction over bumpy roads.

Given the new engine’s outputs, you’d expect it to enliven the V70 more than it does. On paper it’s a match for BMW’s excellent 3-litre, twin-turbo straight-six, yet it doesn’t feel in the same league. It doesn’t sparkle and it sounds and feels strained throughout its range. The smooth-acting auto ’box makes the best of it if you move the lever into the shorter +/- gate – thus engaging ‘Sport’ mode – downshifting more keenly and hanging on to gears for longer. Overall, the handsome V70 T6 isn’t a great drivers’ car. It’s neat enough and has a safe, nose-led balance, which is what you’d want if it was packed with your family. This, of course, is its prime job, and safety underpins many of the options, including the clever built-in booster cushions for the outer rear seats and attendant deeper side-curtain airbags.

I’m not surprised Volvo expects the (rather gruff) five-cylinder diesels to account for 80 per cent of V70 sales; the 185bhp front-drive D5 offers the same near-300lb ft and costs a very useful £7500 less, and you can get the sexy 18in wheels on it, too.