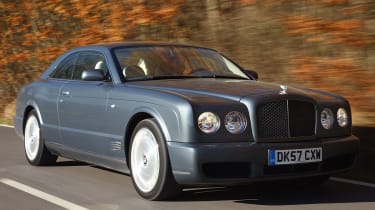 The Bentley Brooklands is a great pub car. By this I don’t mean just that it’s a great car in which to go the pub – it undoubtedly is, but check the size of the car park first – more that it seems like the sort of car that could only have been conceived after a couple of pints. This isn’t a criticism. Uninhibited thought is a wonderful thing. You get together with a few colleagues after work, discuss the footie, glug a few jars and, suddenly, you’re sketching out the blueprint for a 17-foot-long, two-door coupe that weighs nearly three tons with passengers on board, is powered by the world’s torquiest V8 engine, does 184mph and costs £230,000 in ‘basic’ spec.

This sort of stuff simply doesn’t happen at 8.30 on a grey Monday morning in the boardroom. Although the venue of the Brooklands’ conceptual genesis is unknown, Bentley admits that it was the result of a ‘what if…’ exercise. Cynics might be tempted to complete the sentence with ‘…global warming didn’t exist?’. Perhaps Bentley’s engineers are not certain that it does. As its name suggests, the Brooklands harks back to Bentley’s glorious, profligate past when the romance of motoring and racing had a direct and passionate correlation with size, power and speed – as in huge, massive and implausible.

The ‘what if…’ discussion presumably envisioned a flagship successor to the late-’90s Continental T, toting old-school Bentley values exceeding in grandeur those of the Azure T Convertible on which it’s based. In effect, the Brooklands is a coupe evolution of the leviathan soft-top with an elegant steel roof hand-welded to slightly altered rear quarter panels, and a still more potent engine. Given that weight wasn’t an issue, Bentley hasn’t needed to stint on rigidity-enhancing body reinforcements. Strengthened steel is used just about every place it can be: in the A-pillars, door sills, rear quarter panels and cant rails.

In fact, every expression of ‘lavish’ you can think of applies to the Brooklands – not least its use of what people refer to as the most precious commodity of all. It takes 130 hours just to hand-weld the body-in-white together. Any Japanese car plant worth its salt would build a dozen superminis in the same time. For the £14,000 it costs to have ceramic rather than steel versions of the world’s largest (422mm) disc brakes that nestle behind the 20in wheels, you could buy a couple of them. Lavish, too, the 3.5 billion colour/trim/kit permutations offered as standard. Throw the in-house bespoke services of Mulliner Park Ward into the mix and you’d need to employ an astro-physicist to write the number down.

Then there’s the half-century development of the big, pushrod V8 that first appeared, with 6.23 litres, in the 1959 Bentley S2. Since then, its capacity has swollen only modestly to 6.75 litres, but 49 years of applied technology and two turbochargers have seen power and torque increase by 150 per cent to 530bhp and 774 lb ft. Please note the absence of any adjectival enhancement here: the figures simply explain why the Brooklands can accelerate to 100mph in 11 seconds, admittedly a feat that causes small hedgerow animals to faint in the vacuum created by its wake. The fuel consumption and CO2 figures might challenge more zealous environmentalists’ ability to stand up, too.

Still, if they ever felt like getting over themselves they could do a lot worse than sit down in the Brooklands’ fabulously opulent and roomy cabin. On second thoughts, that might not be a good idea. The quantity of leather and wood alone might well induce an apoplectic fit. After that, the slower-burning feelgood sensations stimulated by the peerless levels of craftsmanship and the sort of sublime, beyond-good-taste cool Bentley does better than any other luxury car maker would probably go unnoticed.

Not, fortunately, for us. We’re in Tuscany and, more than a little to our surprise, we’re going for it. There’s an element of major perceptual readjustment to be undertaken when you first get behind the wheel but, after a dozen miles or so, the feeling that you’re in a huge but amazingly wieldy car and not an insanely powerful Sunseeker yacht comes to the fore.

Sunseeker-style acceleration stays, though. The heavy-duty thrust just seems to well up from some fathomless reservoir of ‘dark energy’, accompanied only by the faintest rumble of the low-revving V8 ahead. If you listen really hard you can hear the click of the roller tappets, though don’t try leaning forward with the throttle flattened; your six-pack will lose. The fact that the auto has six speeds seems almost arbitrary, even a hinderance as, in reality, the car could easily get away with half as many. The 530 horsepower developed at a modest 4000rpm seems a bit of an anti-climax in the context of the car’s weight, too, giving just 199bhp/ton. But 774lb ft of torque wipes the slate clean, the smile clean off a 911 driver’s face and the floor with anything that remotely approaches this level of luxury. You may think you know how little ankle action constitutes effortless acceleration but, in the Brooklands, it’s little more than a thought process. During which it’s advisable not to blink.

In the realm of surreal things, however, this is as nothing to the way the Brooklands handles and stops. Yes, it will waft along on the softer of its damper settings in pampering comfort and still cover the ground at a more than respectable lick. But press the suspension’s Sport button, slide the autobox selector into the ‘S’ slot and the Brooklands becomes the world’s biggest, heaviest, best-riding sports car with brakes that just never give in. The grip the chassis generates from its monster Pirelli P Zeros verges on outrageous and body control is frankly stunning given the masses and forces involved. It’s the way weight is made to seem inconsequential, like a bunch of unusually well co-ordinated bodybuilders playing catch with a medicine ball. You can hurl – yes, hurl – this immense car at bends and it refuses to concede one iota of composure. Ultimately the tyres squeal and understeer benignly cools the fun but, once you’re in the groove on the right road, it’s an absolute riot to hustle. And, not to put too fine a point on it, a wonder of the world.

Only 550 will be build and 500 of those have already been sold to people who haven’t driven it. Hope they realise what they’ve got.