Supposed to be a one-off, but such was the reaction that 100 are now being built 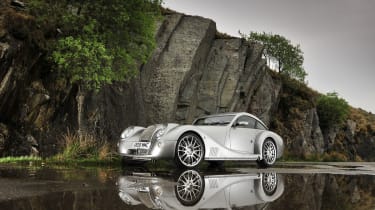 The AeroMax is a lot of car to live up to. It looks so spectacular that, as its driver, you feel you ought to be the hero of some sort of boy’s own yarn. Adventure should dog your every step. Of course, you’d never do anything so vulgar as to actively seek it out; villains would merely present themselves, winsome girls would instinctively turn to you when they needed rescuing, and you’d just happen to overhear conversations in quiet pubs that could affect national security if someone didn’t do something sharpish. Just call me Bulldog Catchpole

The AeroMax has that effect. Its aura seems to tinge everything around it with the glamour of the silver screen. As it moves through the world, everything morphs momentarily into a film set. Gliding along the main street of a town, people stop, turn, point and stare as though perfectly choreographed. The chap behind me driving his van worryingly close to the AeroMax’s flowing rear has even taken it upon himself to fill the role of chief cameraman using his mobile. Everyone smiles.

What’s more amazing is that the town currently enthralled is Malvern, the one place you might expect people not to stop and stare at a Morgan, because it is here that these quintessentially British cars are created. Then again, just 100 AeroMaxes are being built (they’re all sold already) at a frantic pace of two a week, so it’s a relatively rare sight even here.

But even if you saw one every day you wouldn’t tire of gazing at it, for it is a truly beautiful car. Its swooping elegance makes something like a DB9 seem a touch conservative and ordinary. It is so beautiful that people want to be around it and in it, regardless of what it’s like to drive. A Ferrari or Lamborghini might attract attention because it looks modern or potent or aggressive, but if you saw a 599 or Gallardo parked in the street you wouldn’t walk away entirely satisfied unless you’d heard it start up or scream away down the road. With the AeroMax you could (and I did) stand there for hours just looking at it from different angles. The fact that it might move seems like an almost superfluous bonus.

But it does move, so we’re heading west, to the heart of Wales and the rugged, big-screen magnificence of the Elan Valley. It’s a great drive there on swooping, hedge-lined A-roads, and although the sky is a heavy grey and rain is falling, it feels snug tucked up in the Morgan’s cockpit. It was quite a squeeze to slide my legs under the steering wheel and it feels like the seat is set perhaps half an inch too high, but as I settle into the sumptuous leather I soon relax.

It’s intimate in here, the cabin being much narrower than the overall width of the car, the doors close alongside you. Likewise the windscreen seems perched at the end of your nose (you knock on it every time you raise your hand from the wheel to thank someone). Look up and back and there’s a sense of a great vaulted height as wooden spars arch backwards along the roof to the tail. Combined with that split rear window there’s something almost ecclesiastical about it.

We got our first taste of the AeroMax three years ago (evo 080), just after its debut at the Geneva motor show. Designed by Matt Humphries, a 21-year-old design student who had gone to Morgan on a placement, that first car was a one-off created for a Swiss banker who has funded most of Morgan’s GT3 racing. After the reception it received at the show there was never any doubt that more would be made.

These production versions differ only very slightly from the original. The lines running along the bonnet to the A-pillars are more defined, while the tail has been lifted a touch and the rear lights (from a Lancia Thesis, if you’re wondering) have moved up a little. The biggest difference, though, lies under the bonnet, where BMW’s new 4.8-litre V8 now resides in place of the original car’s 4.4. It puts out a hefty 362bhp and 370lb ft of torque, which gives the 1180kg Morgan a very healthy power to weight ratio of 312bhp per ton and an impressive 0-62mph time of 4.2sec. However, that last figure is apparently only achievable if you spec the most surprising thing about this particular car – an automatic gearbox. It seems a majority of Aero 8 customers are now opting for this new ZF six-speeder believing that it suits the character of the car better than a manual. We shall see.

Gradually the landscape on either side of the road starts to rise, along with the sheep-to-people ratio. The weather remains decidedly soggy, and with no traction control and a somewhat remote feeling from the electro-hydraulic steering it seems sensible to be gentle with the Morgan in the corners for a while. No such trouble on the straights, though, and as soon as you open the throttle, whether it be at tickover or 6000rpm, the AeroMax reveals its other masterpiece – an exhaust note that makes Brian Blessed sound demure.

You’ve probably noticed that this car has side-exit exhausts poking through its sills. These are technically an option, but if you’re buying an Aero then they should be considered a must. Hammering through a tunnel of freshly green-leafed oak trees with the throttle wide open and the windows down, the noise is huge and physical, trembling the branches, tumbling into the car, filling your ears and engulfing everything. Imagine an unsilenced Harley Davidson (come to think of it, I’m not sure I’ve ever heard a silenced one…) then add a touch more flatulence, a bit of idling Merlin engine and a whole lot more decibels and you have the AeroMax’s barely legal exhaust note. It is gloriously raucous and somehow suits the car perfectly.

The wet weather has obviously kept people away from the Elan Valley today, but now, in the late afternoon, the rain has stopped and the roads are not only deserted but drying. To drive, the Max feels like it looks: quite unlike anything else (OK, except an Aero 8). The sensation through the steering wheel is much like the impression given by the view over the bonnet, that the front wheels are a long way out ahead. You have to think slightly further down the road than you’re used to, and pour the distant nose of the car into a corner sometime before you – sitting over the back wheels – actually arrive there.

There’s something indefinably vintage about the experience, but as the miles slip underneath you the Morgan reveals a very modern level of grip. The wide track combined with low-profile Avons means the AeroMax clings tenaciously to the tarmac, and the chassis beneath you stays flat even as you push harder and harder and the g-forces build. The nose will push a little wide in very tight corners, but through most bends it’s the rear that’s the focus. As you approach its limits the body feels like it’s leaning very slightly, weight building up on the outside rear tyre until eventually the sidewall decides to flex no more and the beautifully sculpted rear slips into a slide that’s smooth and usually brief (thanks to the lack of a limited-slip diff), arcing round with the winged badge on the Morgan’s nose as its epicentre.

After a while you get into a rhythm, learning to nudge the nose in a fraction early while carrying a touch more speed, then getting back on the power and straightening the wheel, letting the car drift smoothly through, miraculously straightening itself without the need for any further steering input. Then you just roar off down the next straight, those exhausts ruffling the bluebells in the verge.

At the end of the straight, when you’re looking at very large numbers on the speedo, you’ll be glad of the big, strong AP Racing brakes behind the spidery Volk wheels. There’s a bit of slack at the top of the pedal, which doesn’t inspire initial confidence, but push hard and the nose dips a fraction before tracking arrow straight and wiping off speed in a way that reminds you how light the AeroMax is.

Whilst braking you find yourself reaching for the chunky gear selector for the auto ’box. It has a knurled finish that feels almost coarse in the palm of your hand as you push it left and forward for a lower ratio. I find myself subconsciously slotting it into its sequential mode in almost every situation because it’s too lazy in ‘D’, too eager to kick down in ‘S’. I still don’t think an auto really suits the car. If it were just a big GT for wafting across continents then perhaps a torque converter might have a case, but there’s enough of the sports car in the AeroMax to make it worthy of a manual. And as a pay-off for the extra couple of tenths to sixty I suspect you’d get more connection with the rear axle and the added bonus of more pronounced popping and banging on the overrun from downshifts.

Eventually, as the sky starts to pull a blanket of darkness over the valley and the AeroMax’s xenons are called into action, we head back down towards civilisation and sustenance. As befits the car there’s a space seemingly left waiting for it right outside the door of the pub, and the arrival of the AeroMax instantly lends the perfectly ordinary two-storey building a touch of glamour. In the short amount of time it takes to switch the engine off and clamber out, a few people have already spilled out into the cool air to have look.

Coos of appreciation ripple around the group when the rear panes of glass theatrically spring open in unison like beetle wings, enabling me to get some mysterious parcel off the back shelf. And after supper, as I drive away having accidentally overheard several interesting conversations, I can see in the mirror the same people looking on with a touch of wistful envy, no doubt imagining for a moment that this beguiling car is slipping off into the night on another adventure. All the world’s a stage when you’re driving an AeroMax.