The wait is over. Infiniti is here and it’s gunning for BMW and Lexus 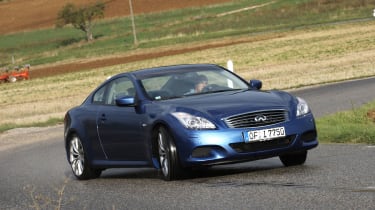 No, this isn’t the best time to be launching a new car brand in the world’s trickiest marketplace. Or a range in which the weediest launch model is powered by a 316bhp V6. Not exactly in tune with the times.

But a nasty dose of economic paranoia was never going to prevent the Infiniti’s arrival in Europe – so much time, effort and preparation has gone into this event that Infiniti had little choice but to plough on regardless. Nevertheless, vice-president Jim Wright must be glad that success isn’t going to be measured in sales figures: ‘The task we’ve been set,’ he says, is that we have five years to establish Infiniti as a credible alternative to the existing premium brands.’ And he isn’t shy about naming names. ‘We want to deliver BMW’s driving experience matched with Lexus’s customer care.’

Nissan’s upmarket sporting offshoot (not luxury, note) isn’t without experience. Having established itself in the US in 1989, it expanded rapidly throughout the Middle East and, more recently, has moved into Russia and China. Why has Europe waited so long? ‘It’s the toughest nut to crack,’ concedes Wright, ‘and buyers here are the most firmly entrenched. Getting people out of their Beemers is no easy task.’

So the question is, has Infiniti got the tools to loosen the wheels of the hitherto unshakeable Bavarian apple cart? Time to find out. We’re in the south of France, not far from the roads we’d used for eCoty the previous week, and we’re in a G37S coupe. When these cars go on sale in the UK next June you’ll be able to select this two-door, a mechanically identical saloon or one of two SUVs. This is the one to get excited about.

Prices start at £31,500, but the S model (another three grand) adds all sorts of trick bits to the package: four-wheel steering, stiffer suspension, bigger brakes, better seats and a viscous limited slip diff. Think of it as a four-seat 350Z. It’s built in the same factory (Tochigi) and shares many of the same parts. Oh, and it’s rather good.

Not quite as chock-full of driver appeal, but in the same ballpark. As you’d expect it’s more GT-ish in its mannerisms and mentality, a touch more polished and urbane, but take it on tighter roads and it perks up very nicely indeed.

It’s not what I expect after a drive up from Marseille airport during which the G37 had impressed not so much with it’s Nissan-level plastics and mouldings, but its comfort: supple ride, pillowy seats, sorted driving position and not much noise from either road or engine.

That changes when you stretch the 3.7-litre V6. It’s the same basic engine that will go into the forthcoming Nissan 370Z. There’s plenty of mid-range tug to go with the slightly uneven, hollow warble, but even when closing in on the 7500rpm limiter the Coupe never feels penetratingly fast. Here’s why: the G37 weighs a tubby 1719kg. Given Infiniti’s targeting of BMW, it’s too much: a 335i M Sport is well over 100kg lighter (and better packaged).

Putting performance to one side, though, I reckon driver appeal is a closer call. All European Infinitis have been adapted specially at Nissan’s Cranfield Technical Centre and feature revised suspension settings. Match this to the car’s 4ws and LSD and you have a car that dives eagerly for apexes, is compliant on all sorts of surfaces and has plentiful traction on the way out of corners. It steers and drives smoothly and precisely and while it’s a touch woolly at the limit, the steering losing detailed feedback, on the whole it’s immaculately well behaved.

And if the seven-speed auto is a little soft, the chunky six-speed manual alters the G37’s character, making it feel more sporting and tightly focused.