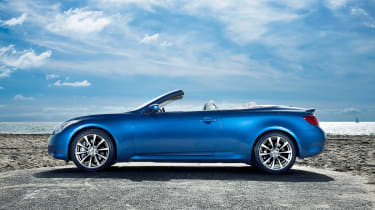 If you fancy a posh Nissan – and there’ll be six models to choose from when the Infiniti brand launches in the UK this September – the G37 Convertible might well be the one that catches your eye.

A topless version of the G37S Coupé, it has a folding hard-top roof built by Karmann that retracts into the boot space in a nippy 25 seconds at the touch of a button, but in three sections rather than the more usual two. The advantages of this, according to Infiniti, are shorter windscreen pillars, giving an ‘airier’ open-top experience for the four occupants and neater packaging when stowed, the G37 retaining a particularly pert rear end by the standards of most rivals.

The convertible shares the hottest coupe’s 316bhp 3.7-litre V6 – a mildly de-tuned version of the engine that powers the new Nissan 370Z. The rear suspension has been modified and the track widened in the absence of the coupe’s active four-wheel steering, which isn’t available. The generous UK spec will include a Bose ‘open air’ sound system that cleverly blanks out unwanted ambient noise on the move.

Apart from the muscular and musical V6, the G37 Convertible isn’t much like a 370Z to drive, though. As intended, it’s softer-edged, more comfortable. Its comparatively chilled demeanour is far better suited to the slick and responsive seven-speed auto transmission than the somewhat clunky six-speed manual. On the standard 18in alloys (19s are optional), the balance between taut, grippy handling and a supple ride is particularly well struck, though very rough roads can excite some scuttle-shake.

Infiniti isn’t planning to take the UK by storm with the G37 Convertible but it has identified a niche it thinks it can fill – let’s call it the not-another-Audi/BMW/Merc niche. As others have found to their cost, that only works if the basic product is up to scratch. Encouragingly for Infiniti, the G37 Convertible is rather good.