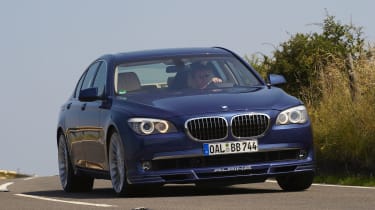 Porsche claims there are no direct rivals to the Panamera. It has, apparently, started its own class. However there are always alternatives and if you want to transport four executives across Europe and have £100K to spend to get the job done, then Alpina’s version of the BMW 750i should loom large on your radar.

For a start, it trumps the Panamera Turbo’s power. The addition of a pair of turbochargers and both air-to-water and water-to-air intercoolers to the 750i’s 4.4-litre V8 lifts its output to a mighty 507bhp. And despite weighing in at over two tons, the first time you pull the trigger that power claim feels conservative. Torque is at play here, for the B7 has oodles of the stuff - 516lb ft all the way from 3000 to 4750rpm.

As usual, Alpina has raided BMW’s parts bins to find the best set-up for ride and handling. Recalibrated springs lower the ride height by 15mm at the front and 10mm at the rear to give the B7 a slightly nose-down angle of attack, while filling the arches are huge 21-inch wheels. Grip is prodigious but the B7 never quite shakes off the feeling of mass, even in its most aggressive Sport Plus suspension setting which limits roll and tightens up the damping. But then this Alpina’s primary role is one of top-line luxury, which it carries off beautifully.