evo's first drive of the mad Nissan Cube. Can its driving experience live up to the looks? 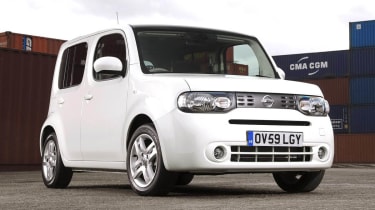 What is it? The Nissan Cube, in official UK import spec for the first time. It’s a distinctively styled mini-MPV, its styling an intriguing mix of hot rod, Kei car and fridge freezer. This one’s in Kaizen spec with a 1.6-litre petrol engine and costs £15,100. Technical highlights In truth, there aren’t any. The Cube shares its platform with Nissan’s Micra supermini and Note mini-MPV. Its main USP is the styling. Browse the pictures and you’ll see that it’s asymmetrical, with differently shaped windows on each side. And since the Cube is going on sale in mainland Europe for the first time, too, Nissan has had to develop two different body styles to ensure that the Cube works in all markets while retaining its eccentric looks. What’s it like to drive? Entirely acceptable. Which obviously isn’t the dab-of-oppo, cocking-a-rear-wheel kind of answer you were after, but it’s a credit to the Cube that it doesn’t drive like it looks. It’s just like piloting a conventional Micra or any rival hatchback, such as a non-Renaultsport Clio: light but direct steering, a smidge of body roll through corners (but nothing too intrusive) and a reasonably snappy gearchange that’s mated to a 1.6 petrol engine with just enough oomph. Those without a pressing interest in cars will find nothing to fault; those of us keener on driving will be left wanting more. How does it compare? It’s hard to pick an obvious rival for the Cube. While its size and proportions aim it at the Vauxhall Meriva/Citroen Picasso family car crowd (it’s preferable to both), the emphasis on looks and image could see it fighting the likes of the Mini Cooper and Alfa Mito for sales. If you’re not fussed about sharp dynamics, the Cube’s a very covetable (and practical) car. Anything else I need to know? There’ll be 2000 Cubes coming to the UK this year, with just the one engine option (this 1.6 petrol) for now. A 1.5-litre diesel will join the range around May.

Find a used Nissan Cube for sale on the Classic and Performance Car site > http://www.classicandperformancecar.com/nissan/cube