A coupe-crossover is how Infiniti describes the 235bhp EX30d. Fair enough, but is it any good? 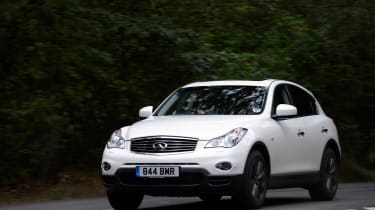 According to Infiniti the EX is ‘the world’s first coupe crossover’. BMW might want to quibble about that definition. In 30d form it’s also one of the first Infinitis (along with the larger FX SUV) to be offered with a diesel engine. Thus equipped, prices start at £35,975 – 300 quid cheaper than the petrol EX.

The engine is the one most likely to grab your attention. It’s a turbocharged 3.0-litre diesel V6, and while it may be down on power compared to the 3.7-litre petrol engine, 235bhp playing 316bhp, it packs plenty of torque – 406lb ft to be exact, 141lb ft more than the petrol. It’s more economical too, of course, with 33.2mpg claimed (versus 25.0 for the petrol).

The £41,220 GT Premium-spec EX30d comes equipped with something called ‘Around View Monitor’. It combines images from cameras around the car to create a bird’s eye view on the centre-console display to help you when parking. You can’t help but be fascinated by it.

Pretty rapid. That big torque figure means the diesel V6 has no trouble getting the better of the EX’s hefty 1985kg kerb weight – 0-62mph takes 7.9sec – while the active torque distribution four wheel-drive system ensures you have little problem getting the power down even on wet tarmac.

It’s refined, too. The engine noise is largely inoffensive and unobtrusive, the seven-speed auto gearbox shuffles gears smoothly (smoother than in some petrol-powered Infinitis we’ve driven), and the ride is on the firm side of comfortable – which feels right for the car – with pitch and roll well controlled.

Some paddles to help make manual shifts more convenient would be welcome, though, as would more feel from the steering and more support from the driver’s seat.

Infiniti would like you to think the EX sits in a niche of its own, and in some respects it does. The coupe-like rear, fractionally lower roof and cunning black sills make it appear smaller than the similarly sized BMW X3 and Audi Q5, while the less aggressive styling means you feel less conspicuous driving it.

It being an Infiniti, you also get more kit and poke for your money than either of those German rivals, and it’ll match them both on build quality, too.

The rear seats can be lowered and raised electronically, which is a neat party trick.