With a little help from the British, the Dutch supercar is greatly improved 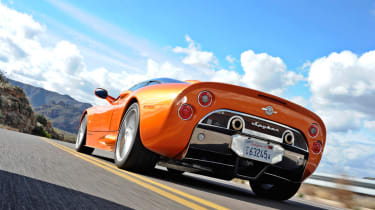 Before we start looking at the new Aileron, here’s a quick résumé of Spyker’s recent history. It all kicked off in 2000 when the ebullient Dutchman Victor Muller decided it was time to re-launch the Dutch brand Spyker, which had lain dormant since 1925, when the original company ceased trading. The first new car from Spyker under Victor Muller’s leadership had its world debut at the 2000 Birmingham motor show. Called the C8 Spyder, it was a distinctively styled two-seater convertible, powered by Audi’s robust 4.2-litre V8 tweaked to deliver 400bhp. In 2001 a fixed-head version arrived. Known as the C8 Laviolette, evo tested it back in issue 101.

I drove that particular car at the time, and while I liked the slightly strange-looking design, I was thoroughly unimpressed with the dynamics. The ride was ridiculously stiff for starters, with little suspension travel, the steering was vague, and to make the brakes work at all took an almighty push on the pedal. I really hope that with the Aileron, Spyker has made wholesale improvements.

The first thing you should know about the Aileron is that it’s effectively a brand new car: only around 20 per cent of the previous generation C8 survives in the new model. The big change is an all-new but still aluminium chassis boasting a much wider front track (increased by 125mm) and an extra 150mm in the wheelbase compared with the previous C8 models, which, incidentally, continue in production for a while, known internally as ‘short-wheelbase cars’.

The longer chassis helps give the Aileron a far better profile than the slightly dumpy Laviolette. I reckon it looks properly exotic when I first clap eyes on it parked outside our Phoenix hotel in the early morning light. The metallic orange paint probably helps, but there’s no denying the Aileron is strikingly attractive. Spyker has really pulled out all the stops with the styling, designing all-new headlights (at a cost of 600,000 euros), new ‘turbine’-style wheels, and deeper, longer doors (allowing the Aileron to have full-size electric windows).

Inside, the car gets a completely new dash, which retains all the beautiful detailing Spykers have become famous for but now includes an LCD screen sitting between the two main dials to display things such as sat-nav directions, music details and gear selection. There’s more room inside this leather-lined cockpit too, with an extra 120mm of shoulder room, seat runners that can move further back and a fully adjustable steering column.

To get going, Spykers don’t have a key as such; instead you get an exquisite round transponder with a couple of buttons on it. Press the left or right one and the corresponding door clicks open and then rises, Lamborghini-style. So very cool… Climb aboard and you discover the seats are excellent too. Developed specifically for Spyker by Sparco, they wrap around you and offer proper shoulder support, should you need it.

The starting procedure on a Spyker isn’t conventional either. Flip up the red cover sheilding the main ‘On’ switch, flick the switch itself down, then thumb the starter button that sits just below. The 4.2-litre V8 bursts into life just behind you, but before you move off you’ll come across another of the big changes: the Aileron is being offered only as an automatic, meaning the ultra-stylish gearlever now controls a ZF six-speed automatic gearbox, positioned behind the Audi engine (think of the Spyker’s drivetrain as effectively the front half of an Audi A8 quattro’s). The move to an auto is a customer-led decision – Spyker’s biggest market is the US, where customers have been badgering for a clutchless ’box since the C8 first went on sale. The old chassis was too short to accommodate one and that’s partly why Spyker decided it was time to develop a longer version.

On paper, the auto gearbox suits the car perfectly. Spyker is keen to point out that the Aileron is not some sort of track refugee but should be seen more as a GT. That’s certainly how the car initially feels as we drive away from the hotel and head for Route 88. Better known as the Apache Trail, it’s the best twisting ribbon of tarmac for hundreds of miles around, clinging to a rocky hillside as it threads its way through cowboy country en route to the Roosevelt Dam in eastern Arizona. We won’t be going that far today as the tarmac runs out well before you reach the dam itself, but still, this should be a lot more fun than the commuting we all endured in snowy Britain recently.

As the miles pass, the first thing you notice is the quality of the Aileron’s chassis. There’s a fluidity on display here that was completely absent from the previous C8. This chassis feels stiff but absorbs bumps beautifully, inspiring confidence and encouraging you to push it further. After the old Laviolette it’s a revelation. But how can these two cars be so different? It only starts to fall into place when my passenger, Spyker’s US test driver, JP Clinging, casually comments, ‘For this new car we asked Lotus to do all the chassis work.’ Lotus is now Spyker’s official engineering partner and is also working on the chassis of the forthcoming D8 Peking-to-Paris high-performance SUV.

So that’s why it’s so much better than before. If you take time out to peer underneath the Aileron you’ll see it’s equipped with the same forged aluminium wishbones as found on the Evora, plus the same coil-over dampers, albeit with unique spring and damper settings. No wonder this new chassis is such a dramatic improvement. It’s super stiff, too – two and a half times more rigid than the previous one, apparently, and claimed to match cars like the Ferrari 458 in tests.

Steering response is also improved. It’s not perfect – it can feel a little numb around the straight ahead – but get some lock on and it doesn’t go horribly heavy like the previous car’s did, despite the Aileron having a much quicker rack. Only the brakes disappoint, as they prove tricky to modulate at low speeds. But this car is still deemed a prototype (it’s the fourth Aileron chassis Spyker has built) and JP is already working on a solution, so this should be sorted before the first customer cars start arriving with owners in April. At least you don’t have to shove the pedal nearly as hard as before thanks to the addition of a brake servo this time around. Push the car harder and you can really begin to lean on the brakes as they’ve got great feel at speed, right up to the point where the ABS starts to cut in.

The Aileron is hardly breaking into a sweat on these test roads, but I can’t help feeling it would be even better with a manual gearbox. I’ve selected the auto gearbox’s manual option via the switch on the central tunnel but, just occasionally, the paddles behind the wheel don’t change gear when I ask them to. It’s another item on JP’s list of things to fix, but harder to sort will be the yawning gap between second and third. You really have to force yourself to push the engine right up to its 7200rpm rev limit to bridge it properly, and even when you do, it doesn’t feel like the claimed 400 horses are all saddled up. Oddly, Spyker lists the same 4.5sec 0-62mph time for this car as it does for the manual C8 Spyder (the claimed top speed is identical too, at 187mph), despite the Aileron being 150kg heavier and having the automatic gearbox. I can’t see how they can both post the same time. Still, it’s rapid enough to enjoy, it’s just not the real stormer the dramatic looks suggest.

Despite the issues, I’m still mightily impressed with this car. It’s so much better than I was expecting; it looks astounding, the details are glorious and the build quality seems top-notch. Talking to the engineers afterwards, it seems as if there are plenty of improvements in the pipeline, too. In fact, there’s a real buzz about the company right now. Having survived the lean times and received some serious investment, its order book is starting to fill up again.

With a starting price of £162,500 the Aileron can hardly be considered a bargain, but for a bespoke, handmade, all-aluminium supercar, built by a dedicated team of engineers in Coventry (Victor Muller tells me around 62 per cent by value of the Aileron is British), the price doesn’t seem quite so bad to me.

Having lived with the Aileron for 24 hours or so, I reckon this car represents a huge step in the right direction for the company that makes it. It’s a great looking car, with big potential. As a result, I expect we’ll be hearing much more about Spyker from here on in.