Can Peugeot's return to drivers' car form continue with the new Ford Mondeo rival, the 508 saloon? 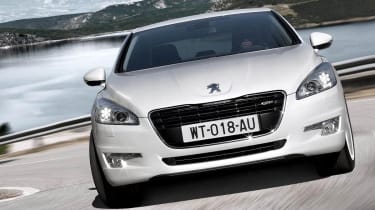 What is it? Peugeot's replacement for both the very long-nosed 407 and the spectacularly unsuccessful 607. Its chief job is to steal sales from Ford's Mondeo, Vauxhall's Insignia and Volkswagen's Passat, but there's also the glass ceiling of premium-ness to break. Peugeot promises undreamed-of levels of quality and refinement, but it also has to show that the company's tentative rediscovery of what made its old cars great driving machines isn't a false dawn. This range-topping GT diesel costs £28,750. Technical highlights? The top GT version comes with a 201bhp, 2.2-litre turbodiesel engine able to generate a whopping 338lb ft of torque. It drives through a six-speed automatic gearbox which uses a normal torque converter but still offers swift, precise manual shifts via paddles or a central selector which, like a BMW's, a Ford's or a rally car's, moves back for upshifts, foreard for downshifts. A double-clutcher is still a couple of years away; Peugeot is developing its own rather than buying one in. The GT has a further crucial difference from lowlier 508s. Its front suspension is effectively a double-wishbone design, using a double-hinged, folded-over upper wishbone taken from the 407. Other 508s use conventional struts. What's it like to drive? It's a bit bigger than the 407, to the great benefit of rear cabin space, but it's also about 35kg lighter engine-for-engine. The power steering is hydraulic, Peugeot preferring to sacrifice a few g/km of CO2-reduction on the altar of steering feel and response. The result is a big saloon (or estate) with very crisp, accurate responses, and a transparency which means that once you've steered into a bend, you need make no further inputs because the feedback you received on turn-in told you exactly what you needed to do. (The strut-equipped 508, although still a good handler, is a little vaguer and you sometimes find yourself having to correct your initial excessive input.) The nose grips hard, the tail is happy to ease out if you ease off, and the 508 strings bends together with exactly the sort of flow that used to make 405s and 406s so good against their rivals. Crucially, and unlike with the 407, all this is achieved with the once-signature Peugeot suppleness and composure that ensures passengers are as happy as the driver. That turbodiesel is also very smooth and quiet – much more so than the cheaper 2.0-litre version which will make the most sales. Shame about the electric parking brake, though, and the auto gear selector's action is stiff and springy – the engineers have promised a fix. How does it compare? Against mainstream rivals, it's the best – in GT form at least. There's no real reason why it can't also be considered against an Audi A4 (it's better), a Mercedes C-class (on a par) or a BMW 3-series (roomier, as good at perceived quality, not quite as driver-enthusing but in with a shout). Anything else I need to know? The cabin is lovely. Discreet design, beautifully precise and unpretentiously sophisticated-looking instruments, German-rivalling switchgear fit, finish and precision, tasteful trim materials. The whole car looks and feels as premium as anything which the market perceives as being so. Brand-victims should feel quite threatened by the 508. Price? It's £28,750 for this top version, but unlike premium rivals you don't then have to start piling in loads of options.