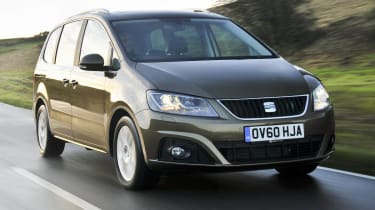 What is it? Not the most evo car we’ve ever tested, that’s for sure. But there’s more appeal to the SEAT Alhambra people carrier than its ability to seat seven people. Here it’s driven in 2.0 TDI 140 Ecomotive SE form, costing £26,070. Technical highlights? MPVs are far more tech-heavy than the vans with windows they may have been in the past. Among the Alhambra’s options are power sliding rear doors (sure to amuse the kids), a huge glass roof with electric opening front pane (the kids might like that too) and programmable interior heating (should please everybody). What’s it like to drive? Pretty good. You can hustle it along with hot hatch enthusiasm, should you please. While it’s never brimming with feel, the steering is precise enough, and the big SEAT’s height and weight don’t impact on handling quite as much as you might imagine. Its 138bhp turbodiesel engine is endowed with enough grunt to keep things interesting and a snappy six-speed manual gearbox ensures its unfeasibly good fun to work hard (a DSG auto is an option). There’s also enough torque to short shift and drive it with the sedateness its Ecomotive tag surely encourages, too.  On a similarly sensible level, the ride is supple and the Alhambra is easy to place on the road. Big windows mean there’s more than enough visibility to park it with ease. How does it compare? It’s not as good to drive as evo’s favourite MPV (we do have one), the Ford S-Max, but the Alhambra boasts big sliding doors and more space inside. It also sits in VED band F, one tax group lower than a similar S-Max. Anything else I need to know? The new Alhambra’s been winning lots of awards of late, including ‘Best MPV’ from our sister magazine Auto Express. The VW Sharan is a near identical sister model, but an equivalent to the SEAT we tested costs nearly £1000 more.