Suzuki tops its UK range with a new sports saloon, the 2.4-litre Kizashi. As fun to drive as its smaller cars? 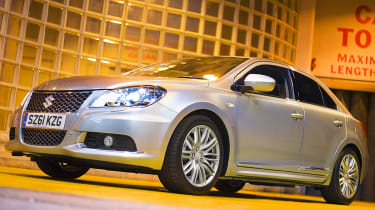 What is it?  A new halo-model and 'a true driver’s car' from Suzuki, the Kizashi is already sold in America, India and Australia but now it’s coming to the UK for the first time. It's a sporty saloon that sits somewhere between the slightly smaller Skoda Octavia and larger Ford Mondeo with prices starting at just under £23,000.  Technical Highlights? Suzuki sees the real selling point as the standard four-wheel-drive setup. The Kizashi is front-driven for most of the time but torque can be split 50/50 between the front and rear wheels if needed. Then there’s the one single engine option, which is a 2.4-litre four-cylinder petrol – a development of the four-pot used in the Grand Vitara – but with an extra 20bhp resulting in a 177bhp total. Performance is modest, with the 0-62mph sprint taking 8.8sec while the top speed is 127mph.  What’s it like to drive?   The Kizashi’s chief engineer may describe it as a 'true driver’s car' but in reality the driving experience is split right down the middle. The handling is actually pretty good and you’ll find a sense of agility and levels of grip more familiar to Suzuki’s Swift Sport than an Octavia-rivalling saloon. The steering is nicely weighted but occasionally a little inconsistent and it could do with a bit more feel too. But then there’s the engine-gearbox combo. Suzuki has chosen to only offer the Kizashi with a CVT ‘box and it’s not a great fit for the 2.4-litre engine. Floor the throttle and there’s a consistent high-pitched wail as you try to accelerate and it doesn’t let up until the deafening red-line at 6000rpm. The best thing to do is take control of its 'ratios' yourself using the steering-wheel mounted paddles. Having driven a snappy-shifting six-speed manual version earlier in the year we were a little disappointed not to see it available as an option; it would fit far better with the driver's car tag. How does it compare?  Suzuki's press conference flashed up the £33,000 Audi A4 Quattro and £27,000 Subaru Legacy as potential all-wheel-drive rivals but there are definitely more fitting cars out there. If you’re looking for a petrol-powered car with a sporty side then the front-wheel-drive, 197bhp Skoda Octavia vRS is a far more convincing proposition. Prices start at £20,330, there's manual and automatic gearboxes and the choice of a saloon-like hatchback or a roomy estate. Both its performance and economy figures trump the Suzuki's and, being related to the VW Golf GTI, it's great fun to drive too.  Anything else I need to know?  Suzuki is planning on selling just 500 Kizashis in the UK but all come fully-equipped with everything from cruise control to heated leather seats. With that amount of kit and those striking looks for £23K, there might just be enough in this package to sell all of them.