The Aston Martin Virage sits neatly between the DB9 and DBS ranges. We try the convertible Volante version 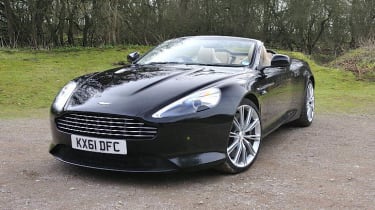 The Virage coupe slots into the Aston Martin range between the DB9 and the DBS, and the Volante is the convertible version. It has an extra 20bhp over the DB9 convertible, a subtle restyle and a slightly more sporting chassis.  Technical highlights?

Nothing groundbreaking here. The familiar 5.9-litre Aston V12 has been tuned to give 490bhp at 6500rpm, putting the Virage slap bang in the middle between the 470bhp DB9 and the 510bhp DBS. The gearbox is the six-speed ZF auto with steering-column-mounted paddles. There’s a sports setting for the adaptive dampers and, as with the Virage coupe, carbon ceramic brakes as standard. What’s it like to drive?

The engine is just magnificent, both in its effortlessly long reach and its subtly menacing V12 wail as the revs climb, the brakes are stupendous when you’re really making progress, the steering’s very agreeably weighted, and for a big, heavy, GT-biased car you feel pretty well connected to what’s going on at tarmac level (and when the roads are damp there’s certainly plenty going on, even with stability control engaged!).

On the downside, the rear feels a little soft and imprecise, while the ride, even in the regular setting, seems overly firm to the point of jiggly on lumpy back-roads, which in turn sets up the occasional shudder and shimmy in the convertible body. The autobox has never been either the smoothest or the swiftest-shifting, but approach the Volante as a GT and it’s perfectly adequate, the Sport setting sharpening both the throttle and the box’s keenness to kick down when you’re in the mood. How does it compare?

The Virage Volante falls slightly between two stools – neither as cocooning and vault-like as a Bentley GTC nor as crisp-handling and engaging as an Audi R8 V10 Spyder. But on the other hand it has more style and sporting character than the Bentley and arguably more old-school charm than the Audi.

Its closest rival is probably Ferrari’s California, which itself is something of a flawed gem but, tellingly, undercuts the Aston by around £15K. Despite its shortcomings, it would be a cold heart that wouldn’t warm to the Virage Volante. Anything else I need to know? Volante means 'flying' in Italian. The first Aston Marin Volante, a convertible version of the DB5, appeared in 1965.