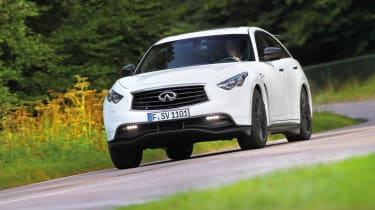 What is it? A Sebastian Vettel edition of the Infiniti FX SUV, which comes to fruition thanks to Infiniti’s title-sponsorship of the champion’s Red Bull Formula 1 car. Special editions named after F1 drivers don’t have a great track record – check out the Niki Lauda Alfa Spider or Michael Schumacher Fiat Seicento – but Vettel was actually involved in the development process here. It costs an eye-grabbing £100,800. Technical highlights? As Sebastian Vettel has an Infiniti FX50 as his road car, he should have a good idea of what he wants from a special edition with his name plastered all over it. The double world champion’s top priority was binning the 155mph limiter so he could properly play on the Autobahn. Infiniti was pretty confident a 186mph (300kph) top speed was possible because it believed the standard 385bhp FX50 had plenty more performance to give, but to make sure, a new body kit was developed – with help from Red Bull Racing – to reduce drag. Then the V8’s ECU was tweaked, which with a freer-flowing exhaust helps produce an extra 29bhp.  Seeing the Vettel for the first time, you can’t help but be impressed with the top quality of the carbon work, which includes an all-new front grille, a very swoopy front valance, extended sills and an imposing rear diffuser complete with an F1-style central fog light. Oddly, the two-piece rear spoiler is not standard and costs £4800 extra. Other changes include new wheels (still 21in but 3.5kg lighter) and the removal of the roof rails. What’s it like to drive? Fire up the Infiniti FX Vettel's beefy 414bhp V8 and a beautifully judged rumble erupts from the bespoke valved exhaust system. The Vettel’s overly sensitive throttle doesn’t make smooth progress very easy and I suspect it’s mapped to give it a sportier feeling than the standard car. The ride is reasonable, but then the Vettel has the same trick ‘dual-flow’ dampers and spring rates as the regular FX50, the only change to the chassis being a ride height set 20mm lower. Once we hit the autoroute there’s finally a chance to stretch the Vettel’s legs. The engine soon whips round to the red line just south of 7000rpm but the resulting punch doesn’t feel as strong as I hoped it would, especially given the top speed claim. After a while I pull onto some quiet rural roads, hoping here will be where the Vettel begins to shine. You can leave the seven-speed gearbox in auto, or select Sport, or choose full manual mode (operated via two paddles behind the soft leather steering wheel). I opt for Sport, which adds a well-judged blip of throttle on the downshifts, as well as speeding up the gearchanges, which feel lazy in auto. But no matter how hard I push, I still struggle to find the Vettel’s sportier edge. The steering feels vague on turn-in and doesn’t inspire you with confidence to push the car to the ragged edge. If you do, the brakes soon start to protest and it isn’t long before the pedal goes soft as the pads begin to overheat.  How does it compare? With a standard Infiniti FX50 costing £58,280, buyers are paying a huge £47K premium (including the spoiler) for the ‘Sebastian Vettel’ kudos. You get tweaked styling and exclusivity (200 worldwide, 50 of those in Europe), but a £67,000 Porsche Cayenne GTS offers similar performance with much better handling. There’s a huge market developing for sporty, individual SUVs, but the only sporty part of the Infiniti Vettel is the name. Anything else I need to know? The only real improvement, apart from the sound, is the top speed, but even that isn’t as high as Infiniti had hoped. Once it removed the limiter, the car didn’t go much quicker, and although homologation hasn’t been completed, Infiniti now expects the top speed will be closer to 170mph.