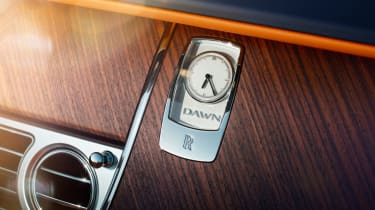 Ahead of its world debut at the Frankfurt motor show, Rolls-Royce has teased the new Dawn convertible. The car, which shares its underpinnings with the Wraith coupe, will be revealed next week – these new pictures and video are all we’ve got to go by until then.

They don’t reveal much. In one picture we can see that the dash will be wrapped in wood and there’s certainly no shortage of chrome trim. The video also reveals that the doors open backwards like the Wraith – the door’s overall shape and handle also look identical. But other than that, we learn little else. 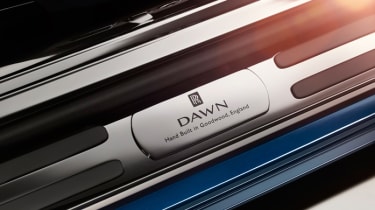 Thankfully, we have a pretty good idea of what the Dawn will be like. Since it shares parts with the Wraith, it’s likely that the car will also be powered by the same 6.6-litre twin-turbocharged V12. In the Wraith it produces 624bhp and 590lb ft of torque. Power figures are still to be confirmed for the Dawn.

We also expect similar levels of luxury to the Wraith, albeit in a more exposed body shell with a soft-top folding roof. Previously, this model would have been called the Wraith Drophead coupe, but it’s now earned a name of its own – perhaps to make it easier to differentiate in the line-up.