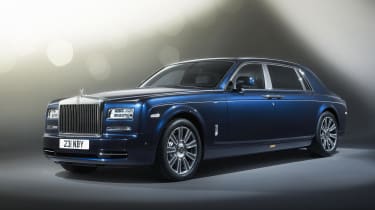 Rolls-Royce has released details about the new Limelight edition of the Phantom, which offers custom door panniers and a new rear seat design.

Named after the British invention used to light the theatre stages of Victorian London, only 25 models of the luxury saloon will be created.

The British manufacturer’s Bespoke team identified three objectives for their new project, designed to help their customers prepare for their engagement, relax in comfort and arrive in style.

Preparation is handled by the “Phantom Suite”, which consists of door storage pockets that can be personalised to the owner’s needs. Rolls-Royce offers both Ladies’ and Gentlemen’s panniers, which can be further customised to the user’s preferences.

In their default offering, both the Ladies’ and Gentlemen’s storage compartments are capable of holding jewellery, several watches and perfume or aftershave bottles. A leather-lined accessory box made of carbonfibre and aluminium, as well as a universal vanity pouch, is designed to hold credit cards, sunglasses and makeup.

Rolls-Royce have revised the rear seats for the Limelight, indicating that their new design may filter down to run-of-the-mill Phantoms. Passenger relaxation is encouraged by the reprofiled seat back, which reclines by twenty-seven degrees to create the most comfortable angle for the headrest.

A calf rest electrically powers to a sixty-eight degree angle to support the passenger’s calf muscles. Completing the relaxed posture is a new footrest which positions the feet up to thirty degrees after rising out of the footwell.

Designed to make a noticeable entrance, the Phantom Limelight is available in Gala Blue, with a hand-painted coachline in the shape of a diamond. Nine-spoke alloys are also present with a differing design from the regular Phantom.

Unique to the Limelight are the Piano Seashell two-veneer and Smoked Chestnut wood finishes on offer, while a new clock taking inspiration from the exterior paintwork.

Rolls-Royce are taking orders for the rare model, but no word has been given as to the number destined to remain in the United Kingdom.