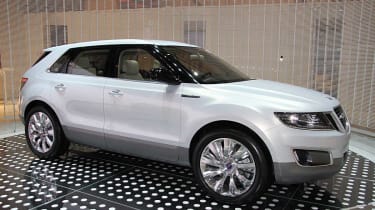 One we'd seen before at the Detroit show, the 9-4X Biopower which is pretty much the production 9-4X crossover 4x4. Sharing a platform with a forthcoming sub-SRX-size Cadillac SUV, it will be built in Mexico. Of rather greater interest was the 9-X BioHybrid, whose 1.4-litre, bioethanol-fuelled engine and attached electric motor together muster 200 clean bhp. That, combined with a 105g/km CO2 output on bioethanol, sounds quite impressive. But it's the bodyshape that's really interesting. It's a wide-tracked, big-arched three-door with the trademark Saab blacked-in screen pillars and a continuous horizontal curve from windscreen header back to the rear side windows. It is, in fact, the first glimpse of Saab's forthcoming A3 and 1-series rival, most likely to be called 9-1. Saab has hinted at this car for years. Now reality bites as GM finally gets serious about Saab.