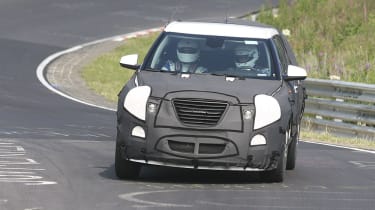 We've got close and were able to verify the true identity of this masked prototype. We first saw this bodystyle at the Detroit Auto Show, being touted at as the 9-4X BioPower Concept, but Saab is obviously serious about bringing this to the marketplace in a timely fashion. Codenamed GMT168, the Saab 9-4X will arrive in time for the 2010 model year. Sharing the platform with the upcoming Cadillac BRX, the Theta-Epsilon based Saab will be built in at the Ramos Arizpe plant in Mexico. And unlike the 9-7X, this will be sold globally. Styling – as you can easily see – will be very close to that of the concept, and powerplants will include a range of petrol engines, as well as a new 250bhp diesel. The 9-4X will also offer Saab’s XWD all-wheel-drive system.