An all-new look at the traditional Saab convertible 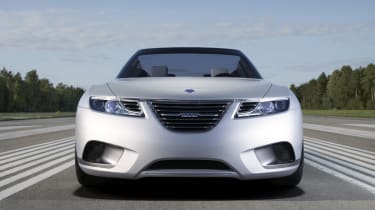 It goes hand in hand with the 9-X BioHybrid concept which was at the British motor show, and shares its 1.4-litre turbo engine, boasting 197bhp and a 0-62mph sprint of 8.1sec when running on E85 fuel – 85 per cent bioethanol and 15 per cent petrol. Use of E85 also boosts the car’s green credentials, with the projected emissions beating most city cars.

It should be more of a cracker to drive than other Saabs too, with short front and rear overhangs and a kerb weight kept down by the use of a fabric roof and the lack of traditional boot lid – a simple sliding storage compartment takes its place.

The roof is a novel, flat-folding design, which Saab is calling a ‘Canopy Top’. The large c-pillars act as buttresses, supporting a reduced size soft-top and cutting the need for a complex (and heavy) roof mechanism.

It has the same front end as the 9-X BioHybrid, which saw a return of the classic Saab wraparound windscreen.

No clues on when, or if, it will make production. But a sharp car like the 9-X Air is just the kind of thing that could make us love Saab again.