Prices, specs and a release date are announced for the Skoda Rapid Spaceback 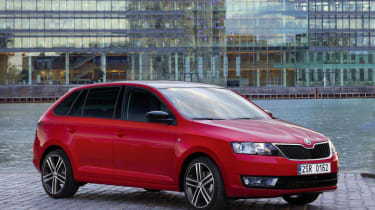 Prices, specs and a release date for the Skoda Rapid Spaceback have been released. The compact five-door estate model is spun off the regular Rapid, also with five doors though with a body style which looks more saloon than hatchback.

The Spaceback apes its distant Audi A1 Sportback relation with a slightly jazzier name for some practical extra touches. Curiously, its bootspace figures are lower than the standard Rapid’s, ranging from 415 to 1380 litres, though the Spaceback shape is likely to prove friendlier to large loads. Skoda boasts of sector-best rear legroom and headroom, too. It also aims to deliver higher quality with different dashboard materials, a new steering wheel and extra tailgate glass.

It costs more than an equivalent five door, with prices ranging from £14,340 to £18,900, meaning a rise of around £600 over its base model equivalent, with more standard equipment promised. Trim levels are named S, SE and Elegance. All Rapid Spacebacks get air conditioning, ISOFIX seats and ESP, with the SE adding 15in alloy wheels, parking sensors, cruise control and Bluetooth and the Elegance getting 16in rims, climate control and some chrome and aluminium interior trim. A panoramic glass sunroof is among the options.

Engine choices are a turbocharged 1.2-litre TSI petrol, with 85bhp and 104bhp versions, a 120bhp 1.4-litre TSI petrol and two diesels, 89bhp and 104bhp versions of a 1.6-litre TDI engine. A seven-speed DSG twin-clutch paddleshift gearbox is available on some models. Performance peaks are a modest 9.5sec 0-60 time and 128mph top speed, while the fuel economy for some models tops 70mpg. A more frugal 99g/km CO2 Rapid Spaceback Greenline joins the range shortly.

UK deliveries start in January 2014. And as with the regular Rapid, a vRS performance version looks highly unlikely.