And evo will be driving the ultimate Octavia vRS at Bonneville Speed Week! 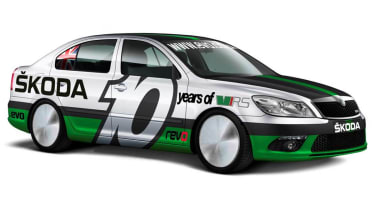 To celebrate the 10th anniversary of the vRS brand, Skoda has announced ambitions plans to take a highly tuned Octavia vRS to the legendary Speed Week at the Bonneville Salt Flats from the 13th to the 19th of August.

Not only that, but evo’s Richard Meaden will be driving the car!

Speed Week is an annual gathering of the world’s fastest cars on the harsh salt flats of Bonneville in Utah. The Octavia vRS that Skoda is preparing for the event will be comprehensively modified. The 2.0-litre engine will deliver well over twice the standard output and the bodywork, wheels and interior will also be adjusted to suit the demands of the event.

As you can see from the images below, the car is already undergoing its transformation. A brand new Octavia VRS was delivered to Skoda’s HQ where it was unwrapped, stripped and the standard engine dyno tested.

evo is closely involved in the project. Our Contributing Editor Richard Meaden will be driving the car on the salt and has already had his balls (sorry, body) measured for the unique race suit required for the event. You can read his blogs here.

Richard will be blogging during the build up to Speed Week and regular news updates featuring the engine build, shakedown, shipping and testing will appear on evo.co.uk

Click here to talk about the run with us