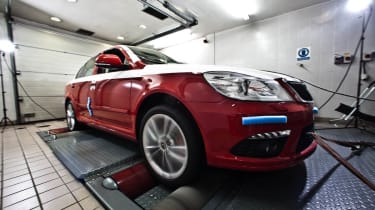 We’ve got a new gallery of pictures that show the (less than gentle) process that goes into transforming a bog standard Octavia vRS into a Bonneville speed car.

This is the Octavia vRS that evo is going to be taking to the salt flats for the famous Bonneville Speed Week later this year – when our very own Richard Meaden is going to be charged with making sure this becomes the fastest Skoda in history. We’ve already told you about some of the car’s technical highlights, but now it’s time to delve deeper into the story of the build.

The red Octavia vRS arrived at VW Group’s Milton Keynes workshop brand new, and still wearing its protective plastic wrapping. That didn’t save it from being completely stripped down, with the whole interior and trim being removed, and most of it being put straight into the bin.

‘The car was brand new – it had just eight miles on the clock,’ says Ricky Elder, the project consultant in charge of the transformation.

Next, the car was sent to Safety Devices where it was fitted with an extra-tough roll cage designed to dissipate the energy if the car crashes at 200mph. It’s far bigger than the sort of cage you’d find fitted to a normal saloon racer – Elder describes it as a ‘shark cage’ – featuring floor bars to ensure the driver is surrounded with protection on all sides.

The standard Octavia engine has been strengthened and given a gas-flowed head – but the biggest change is the arrival of the monstrous Garrett G-05 turbocharger, the sort of blower normally used for hyper-tuned Nissan Skylines and Mitubishi Evos – which features a 65mm billet-cut compressor wheel.

‘The size of the turbo means it probably won’t start spooling until 4500rpm,’ says Elder, ‘because it’s a twin blade it’s effectively two compressor blades sat on top of each other. In theory you get twice as much air onto twice as many blades as a stock turbo. The engine will rev to around 7800rpm with peak power coming between 7300rpm and 7600rpm.’

To give the car its 200mph capability it’s been fitted with the gearbox from an Octavia Greenline, which means that 7700rpm should work out as 201mph in fifth gear. Different tyres and wheels will also be taken to allow the gearing to be altered – at 200mph the wheels are still going to be ‘slipping’ by between 6 and 12 percent, depending on the salt conditions.

Now watch the video as Dickie meets the car for the first time by clicking here.