Estate version of new sleek Superb to arrive in September 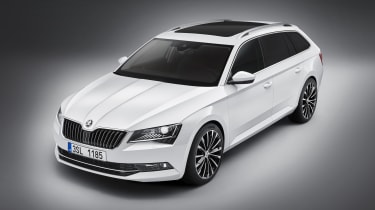 Skoda has confirmed the details of its 2015 Superb Combi, the estate version of its new flagship model. Set to arrive in showrooms this September, the Combi offers class-leading interior space and comes available with the ‘effortless’ 276bhp 2-litre TSI engine we enjoyed so much in the hatchback.

Like the hatch, the Combi sits on an MQB platform wheelbase some 80mm longer than its predecessor. The Combi is also up to 75kg lighter than the old model, partly thanks to the use of more high-strength steel in its body shell.

Several of the hatchback’s engine options are included with the Combi, with entry-level models being powered by the same 118bhp turbo diesel four-cylinder. The most powerful diesel engine will be the 188bhp 2-litre turbo diesel; in the hatch it mixes a 7.6sec 0-62mph time with a claimed 56.5 combined mpg. 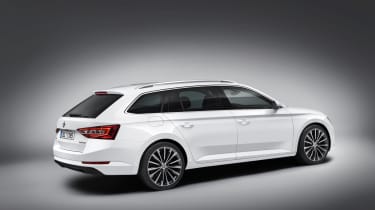 The Combi receives a slightly smaller range of petrol engines, with the hatch’s base 123bhp 1.4-litre four-cylinder not offered. The entry petrol engine will therefore be the 148bhp 1.4-litre TSI, followed by the 2-litre TSI in 217bhp guise.

The engine we’re most interested in is the 276bhp 2-litre TSI. Borrowed from the SEAT Leon Cupra 280, the turbocharged four-cylinder is able to accelerate the hatch from 0-62mph in 5.8sec (exact figures for the Combi are yet to be confirmed).

Drive is sent to the front wheels as standard, but optional four-wheel drive (Haldex 5 controlled) is also available. A manual six-speed gearbox features as standard, with a six-speed DSG the optional alternative. 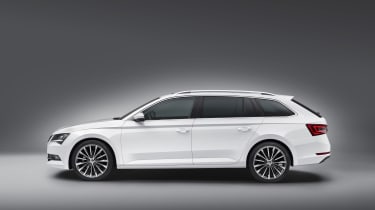 The Combi’s strongest selling point will be its class-leading interior space, with a boot big enough to swallow 1950 litres of luggage when the seats are folded down. This is a 170 litres more than the equivalent Volkswagen Passat Estate, and a substantial 320 litres more than the Ford Mondeo Estate.

The new Superb also gets a raft of standard kit, including Dynamic Chassis Control (DCC) which allows the car’s chassis to be adjusted through four modes – Comfort, Eco, Normal and Sport – as well as intelligent assistance systems like lane assist and SmartLink smartphone connectivity. 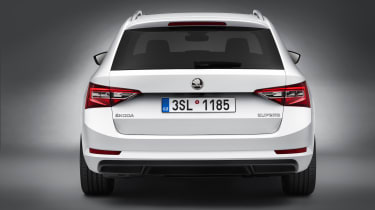 We were impressed by the Superb hatchback’s solid body control and strong engine range, so expect more of the same with the Combi. Dressed in Skoda’s latest VisionC concept design language, the Combi makes a strong case for being the sleekest looking estate in its class; and equipped with the range-topping 276bhp four-cylinder TSI, you have one very enticing all-rounder.

The Combi will sell for £1200 more than the equivalent hatch Superb, with prices expected to start around £20,000 when order books open in June. The Combi is an important model for Skoda: the previous model accounted for 35 per cent of all global Superb sales from 2009.