We rate Skoda's Yeti so highly we pitched it against our 2009 Car of the Year, the Lotus Evora. But to help the Yeti feel more at home, we took them ice racing 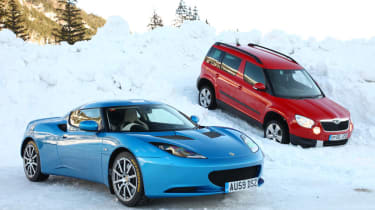 One of the great things about the car industry is that, despite its financial meltdowns, government bail-outs, dubious hybrid love-ins and an unhealthy obsession with marketing nonsense, every now and again it throws up a genuine, heart-warming surprise. A surprise like the Skoda Yeti.

Right enough, a boxy, Czech-built ‘crossover’ (what was that about marketing nonsense?) created from the contents of the VW Group’s bottomless parts bin and named after a mythical, snow-loving monster is an unlikely starting point for an evo hero. Indeed, now seems an appropriate juncture at which to confess that when the original Yeti launch invite slapped onto the doormat at Evo Towers late last year we politely declined.

But when we eventually did get ourselves into one – just a couple of months back, for a regular week’s press loan – something strange happened. Everyone who drove it came back raving about how good it was. It was the road-testing equivalent of stepping on an upturned garden rake. We just didn’t see it coming.

Rating something highly after a quick razz around the block is one thing. Rating it highly after driving it home and back is a more accurate barometer, but hardly conclusive. What the Yeti needed was a proper evo-style drive, a kind of ‘welcome to the family’ adventure to cement the oddball Skoda’s status both in our minds and yours. And that’s why I’m charging through the French Alps, feeling the blocky treads of winter tyres squirming and wriggling on the slick, icy curves as I do my level best to keep the Yeti’s bluff nose in the wake of a hard-driven Lotus Evora.

A Skoda with a Lotus! Surely some mistake? Ordinarily yes, but when the good folk of Hethel rather unexpectedly invited us to try the Evora on an Andros Trophy ice racing circuit, the seeds of an extraordinary (some might say plain weird) drive story began to germinate…

Lest we forget, the Lotus Evora is our reigning Car of the Year. As such it’s the very highest benchmark against which we can judge any car, so while we’re not pitching the Yeti against it in the conventional sense, the Lotus will serve to provide the purest context we can lay our hands on. Our logic is simple: if the Yeti shines in such dazzling company, even for a moment, our collective excitement (not to mention professional reputations) will be vindicated. If not? Well, we’ve still been able to arse around in the ice and snow…

Back on the mountain road I’m engaged in an uphill battle in more ways than the obvious. Encouragingly, though, I’m not especially bothered that it’s a battle I’m going to lose. True, it’s nice to stay close enough to see Matt Becker, Lotus’s chief development driver, ease the Evora into a neat and annoyingly precise slide around one of the countless hairpins on our Alpine route between Geneva and the French ski resort of Serre Chevalier, but when the Lotus inexorably and, yes, inevitably puts cold, clear mountain air between itself and its enthusiastic pursuer, it quickly transpires that there’s just as much fun to be had from the solitary challenge of pitting my wits and the Yeti’s abilities against what’s turning out to be a brilliant tangle of tarmac. In fact it’s a hoot.

Our Yeti of choice is the most powerful petrol model, the turbocharged, direct-injection 1.8 TSI SE, which costs £19,305 and boasts 158bhp and 184lb ft of torque. According to Skoda’s figures, that’s enough to power the 1505kg Yeti to 62mph in 8.4sec and on to a top speed of 124mph. Modest by evo standards, but quicker than its looks would suggest.

Ah yes, the looks. For what it’s worth, I reckon it looks cool. Yes it’s quirky, and the Skoda badges are the size of dinner plates, but the styling is sharp, neat and confident with some really high-quality detailing, such as the ‘Yeti’ monogrammed headlight lenses. What’s more, it makes its obvious rival, the Nissan Cashcow, look even more pig-like, if that’s not an oxymoron.

On our charge through the mountains, the Yeti’s Haldex four-wheel-drive underpinnings make it predictable and trustworthy in the manner of a front-drive car, but you can also play some games, especially on corner entry, which help neutralise the balance and even get the tail gently coming into play. It’s subtle, satisfying stuff. What’s more, where you might expect the elevated ride height, sub-zero temperatures, salty/damp/icy road surface and the less stable, more squidgy treadblocks of the Avon winter tyres to conspire against having tidy, controllable fun, it actually all seems to work in the Yeti’s favour, especially if you disable the ESP, or at least switch it off as far as the nannying system allows.

The speed-variable assistance for the power steering plays to the responsive front-end’s strengths, delivering quick but not-too-twitchy turn-in. Even on these tyres you can lean enthusiastically on the nose, enjoying the sensation of lateral load being shared evenly between both front wheels rather than heeling over on the outside tyre as you might expect from a car of this type.

Consequently, you soon realise there’s no need to make allowances for the Yeti’s multi-purpose, multi-surface set-up. It feels entirely happy being chucked around like a hot hatch, and while it doesn’t deliver quite that level of bite, the trade-off is an easy compliance along with a pleasing and more frequent sense of finding the limits of the tyres. When you do, it becomes clear that the seats – very comfortable in normal use – are fundamentally lacking in lateral support, although it’s probably fair to say that Recaro-like rib-huggers were outside Skoda’s design requirements.

The TSI motor is smoothly effective, especially when summoning peak torque from just 1500rpm, but it’s not especially characterful. In fact it’s pretty soulless, never emitting more than an inoffensive hum no matter how hard you cane it. However, on the long drive here from the UK it was eerily quiet, even at velocities that suggest its claimed top speed is pretty much on the money.

During sustained abuse, the brakes remain consistently impressive, with the kind of progressive, linear response that some VW Group cars can lack. Equally slick is the six-speed manual gearbox, which delivers punchy shifts when you’re going for it, yet is equally happy to be palmed around the gate when you’re mooching.

On arrival at Serre Chevalier, I’m buzzing. Not, it has to be said, the manic, slightly sweaty Red Bull-style high-frequency buzz derived from wringing out a fast car – and yourself – on challenging roads, but the more mellow surge of satisfaction from making the very most of a car that has memorably proved that it’s way more than the sum of its parts.

I’ve harboured a sneaking hope that the ice track will give Skoda’s phenomenal snowvan a kind of home advantage, especially as the all-wheel-drive Yeti and the rear-drive Evora are shod with very similar winter tyres. Or so I thought… All hope fades when Becker ushers me into a makeshift workshop and points to a stack of narrow, studded tyres that look suspiciously like Pirelli’s WRC rubber. ‘Do you like ’em?’ he says with a hint of mischief.

Indeed the Sottozeros are WRC tyres, although Matt expresses disappointment that they’re fitted with small tungsten pips rather than the 6mm fangs that protrude from Pirelli’s most aggressive winter rally rubber. Needless to say, sympathy is in short supply from the evo corner of the workshop…

The Yeti’s ‘computer says no’ ESP system isn’t filling me with hope either. Understandably, it has a major sense of humour failure when it realises the Skoda’s wheels are attempting to find purchase on sheet ice covered with a dusting of snow. Desperate times call for desperate measures, so we resort to consulting the owner’s manual. After studying the guide for the fuses in the underbonnet fuse box we identify a likely candidate and pull it out. Cue a flashing yellow warning light on the dash and… lots of lovely wheelspin. Result!

It seems suicidal to attempt to drive at speed on such a lethal surface using non-studded tyres, especially as just prior to getting underway I climb out of the car to get something for photographer Fly and promptly fall flat on my back. Fortunately the Yeti finds its feet better than I do and soon warms to the task, slewing this way and that under power, then yawing into comedy slo-mo oversteer with a bit of help from the rudder. Get back on the power at just the right time and you can even trick the Haldex four-wheel drive into prolonging the graceful arc right the way to the corner exit, but more often than not it simply pulls us straight. No matter, for it shone in the mountains when it really mattered.

What of the Evora? Well, there’s something remarkable, yet wholly fitting about the unexpectedly balletic way in which it takes to the ice. Becker’s right, we really could do with the long studs, but still the Lotus dances from curve to curve, swinging beautifully from turn-in to exit with spooky, Matrix-style stop-motion precision. By using all the 3.5-litre V6 engine’s rev range and leggy gearing it’s possible to extend each slide to the point where you can seamlessly transition into the next corner, billowing clouds of snow powder in place of tyre smoke. It goes some down the straights too, touching 60mph through the back ‘straight’s’ long, lazy left-right esses.

Somewhat smitten, I elect to drive the Lotus back from Serre Chevalier to our hotel in Geneva. Now back on tarmac and conventional winter tyres, it feels just as sweet as I recall it being the last time I drove one. Every dynamic element, from steering and brakes to ride and handling, all feel like they’ve been polished to a deep lustre. The humble Toyota V6 sounds more like a Honda NSX than I remember, too. The gearshift’s still a bit snaggy though, which proves even eCoty winners aren’t perfect.

So the Evora’s majestic. That’s hardly headline news. However, what our 1700-mile Alpine odyssey has also proved is that the Yeti is truly multi-talented, an all-rounder of rare breadth and cohesion, even when driven in the company of a reigning eCoty champion.

It does the junior SUV thing without the obnoxious image. It does the family MPV thing without being mumsy. It’s a convincing all-wheel-drive soft-roader that can tow up to 2000kg, which, if you want a more useful unit of measurement, is a decent sized trailer and a trackday sports car of your choice.

Most impressively it bubbles with the enthusiasm, chuckability and infectious spirit of a well-executed hot hatch, yet deftly avoids the pitfall of trying too hard to be overtly sporty. It’s this amazing versatility and bold execution that ensures it manages to feel ‘right’ so much of the time, and is why we’re such big fans.