The Skoda Yeti Xtreme is a rally inspired SUV concept, and will be shown at the Worthersee GTI festival 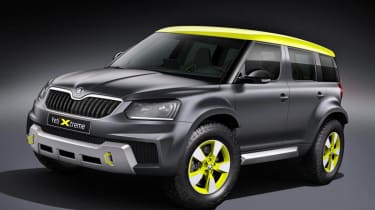 Skoda is bringing a rally-inspired concept version of its Yeti to the Worthersee GTI Fan Meet held in Austria this week.

Called the Skoda Yeti Xtreme, the small crossover has been beefed up with chunky all-terrain tyres, large wheel arches and an adjustable chassis set-up fit for off-road use.

With an eye-catching yellow-green roof, 17in wheels, underside protection and muscular bumpers, the Yeti Xtreme looks capable of taking on rally stages.

Inside the Yeti Xtreme is an interior far removed from the world of practical road cars, with similarities to a competition spec rally car. Four individual Recaro racing seats feature four-point harnesses, whilst the rear is kitted out with equipment such as a spare wheel, thermos flask, sand shovel, belt cutter, fire extinguisher and even a pair of ‘recovery tracks’ in case the Yeti gets beached.

The Yeti’s 1.8-litre TSI engine is twinned with a six-speed DSG paddleshift gearbox. Peak outputs of  150bhp and 184lb ft. Despite the butch looks, performance is modest, with a 0-60 time of around 9sec and a top speed of 119mph. Its brake set-up is borrowed from the Octavia vRS hot hatch.