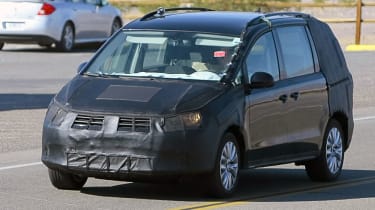 The original debut of the current generation was way back in February 1995 – almost 16 years before the second-gen Sharan will make its debut at the 2011 Geneva Show.

Like all its competitors from Ford, Renault and Opel, the new Sharan will grow significantly in all dimensions but, different from those, will feature two sliding doors for easy access to the passenger compartment. Apart from this radical step, however, the new Sharan will be an evolutionary development of the current design: more modern, of course, and with the new Golf’s face consisting of grille and headlights, but all in all not too far away from the existing model.

Under the bonnet we expect petrol engines between 115 and over 200 hp or TDI diesels up to 160 hp. Price-wise the car will have to be well above the current Sharan which could make Volkswagen offer the existing model for yet another year or two.