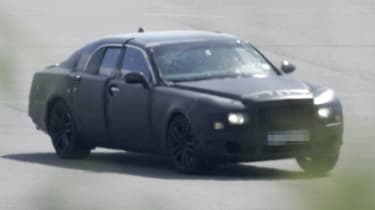 The new Bentley luxury saloon has been spotted out testing.

The ‘Grand Bentley’ gets its big unveil in August 2009 at the Pebble Beach Concours in America, but we’ve got a better idea of what to expect now.

It’ll be big, for starters – the Arnage it replaces isn’t exactly small, but the new car is taking a big step upmarket, in price, size and stature. There’ll be an overhauled version of Bentley’s familiar 6.75-litre V8, with a probable Biofuel version that can run on E85 like in the Continental Supersports.

Despite the recognisable powertrain, the car will be new from the ground up, and has been developed entirely under parent company VW’s watchful eye. Much of the company’s talk in recent teasing press releases mentions Bentley’s illustrious racing past, so expect the new car (which is currently unnamed) to boast a fairly classic shape and styling cues.

The new Bentley gets its world premiere at Pebble Beach on August 16 2009, with sales likely to begin in 2010 priced a good bit north of £200,000. Keep your eyes on evo.co.uk for more information.