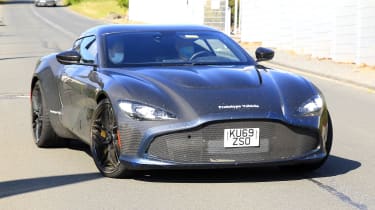 Revealed in 2019 at Audrain’s Newport Concours in the US, the DBS GT Zagato will be sold as a pair with the DB4 GT Zagato continuation, for the eye-watering sum of £6m. Ahead of the start of production later this year, spy photographers have spotted the exclusive new model testing.

Sold as part of the DBZ Centenary Collection, the DBS GT Zagato is based on the DBS Superleggera, boasting the same 5.2-litre twin-turbocharged V12. An additional 45bhp has been extracted, however, bringing total output to a colossal 760bhp – no new performance figures have been disclosed, but an improvement over the Superleggera’s 3.4sec 0-62mph time and 211mph top speed are to be expected.

The appearance of a prototype this close to first deliveries has sparked rumours of an extended production run, in addition to the 19 examples due to be built within the DBZ Centenary Collection. Though buyers of the £6m pair might not be too pleased, it wouldn’t be out of the question – 325 examples of the Vanquish Zagato were produced, spread across four model variants. 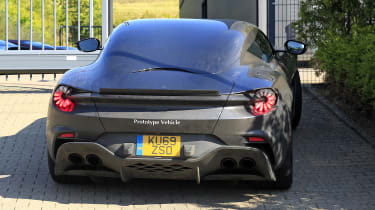 Visually, the prototype bears no drastic differences to the model launched last year, with the same, typically Zagato double-bubble roof, a solid carbonfibre canopy devoid of a rear window, and the iconic gaping grille. Although perhaps a result of its rudimentary test mule spec, exposed carbon replaces the striking Supernova Red paintwork seen on the Concours car, with badging, gold elements and the unique ‘dynamic’ grille also absent.

The first DB4 Zagato continuations have already been delivered, with DBS GT Zagatos set to complete collection this year. As to whether we’ll see more than a mere 19 DBS GT Zagatos on our streets, time will tell...