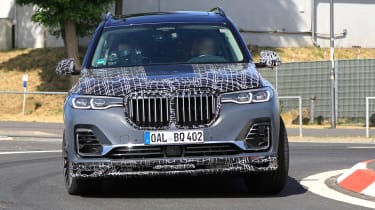 Alpina has been spied testing what will be its biggest model ever, due to be called the XB7. It’ll be based on the BMW X7, itself hardly a masterclass in elegant and restrained luxury car design, and now Alpina looks to be doubling down on the controversial model with its own take that could only be described as an automotive Herman Munster.

Details remain thin, but we expect Alpina’s X7 to be petrol powered, alluding to an XB7 nomenclature in keeping with the traditional naming convention. As such, BMW’s 4.4-litre twin-turbo V8 should rise in power compared to that in the current M50i flagship, boasting somewhere in the region of 600bhp. That V8 will likely be connected to the usual eight-speed automatic transmission and power all four wheels.

As is also Alpina convention, the XB7’s body styling will have its origins in the standard-body X7, rather than the M Sport or M Performance variants, therefore keeping it’s heavy use of chromwork. Alpina will, however, apply its own lower clips front and rear, as well as offer what look to be at least 22-inch, or perhaps even 23-inch Alpina classic multi-spoke wheels.

Expect the same suite of Alpina elements to be applied in the cabin too, as well as bespoke tuning for the adaptive air-suspension, steering and traction control systems. The standard X7 already drives as one would expect of an SUV pushing 2.3-tons, but whether Alpina intends on sharpening the dynamic package, or instead aims for a more relaxed driving experience, remains to be seen.

Likely to be most popular in markets such as the Middle East and the US, the Alpina XB7’s appeal will surely be limited in the UK thanks to its thirsty V8 petrol engine, and if you’ve not already noticed our somewhat skeptical tone, we’re dearly hoping it will remain that way.