Do these prototypes indicate McLaren's involvement with the Viper project? 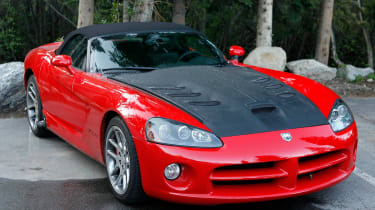 This is one group of prototypes that all our sources are stumped on. And there wasn't just one powertrain prototype here - there were at least four of these red-hot Vipers with a vinyl-covered camouflage hood and various wires and test gauges - but nothing could hide the huge vents on the hood, and we managed to get excellent views.

Sources are telling us NOT to expect a 2007 Viper - that model-year will be "skipped" and the '08 models will make an early appearance within the first quarter of 2007. And we do know that Dodge wants to expand the horsepower in the Vipers, but the 'what' and 'how' are currently just rumours. One rumour is that McLaren is involved with the Viper project and is tweaking a V10 to put out nearly 650-horsepower!