We look at Audi's future niche-models that are a bit more exotic. Andreas Conradt lets you in on the secret plans 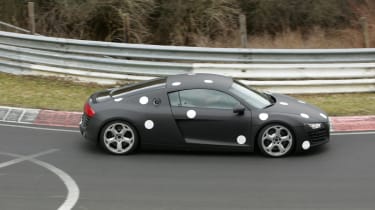 Inspired by the success of the mid-size coupés built by Mercedes (CLK) and BMW (3‑series), Audi will soon release its own interpretation: the new Audi A5, a late successor, if you want, of the legendary A4 coupé. The new chassis underneath the edgy body will form the basis of the next-generation A4 and A6 ranges - the next A4 is scheduled for launch in autumn 2008, for the 2009 model-year. However, first up on the new underpinnings will be the A5, a coupe to be positioned (as its name indicates) between the A4 and A6 ranges in price and size. The A5's styling will be influenced by that of the Nuvolari concept car - also reflected in the new-generation TT. It will be a roomy four-seater and is expected to be launched in late 2007; a year later, a soft-top cabriolet version with cloth hood will replace the current A4 cabrio.

Audi is apparently planing to make the “5” a complete new range consisting of the coupé and an Opel Signum-like crossover offering bigger cabin space than the A4, a higher roof and a hatchback rear-door. Likely to be called the A5 Sportback, the new crossover will slot in between the A4 and A6 Avants and may play to role the Golf Plus plays in the VW Golf-game.

Looking into the sports-league of the German manufacturer, the true stunner is going to be the new Audi R8. Audi has confirmed production of the super-coupe, which will go on sale in spring 2007. It derived from the Le Mans Quattro concept car seen at the Frankfurt Motor Show in 2003 and will take the name of Audi's Le Mans car to emphasis its performance potential. Though some of the technologies used in the car, such as the FSI direct fuel injection system, were developed in the R8 racer, the production R8 is more closely related to the road-going Lamborghini Gallardo.

It shares a version of the Gallardo's structural underpinnings and will come with a detuned version of the Gallardo's 5.0-litre V10, giving 450bhp, as well as the 420bhp V8 found in the RS4. This is a measure to ensure that sales of the more expensive Gallardo will not be affected. Audi hasn't announced pricing for the R8 as yet, but it will undercut the Gallardo by some margin. A starting point of around EUR 95,000 has been rumoured, putting it up against the Porsche 911 and Aston Martin V8 Vantage.

A bit further down the range, the new S3, to be launched towards the end of this year, will come in three-door form only, but we can expect a few subtle styling modifications over the standard A3 - perhaps a different grille, and some unique alloys - for the production car. Rumours originally suggested that the S3 would get the VW Group 3.2 V6, turbocharged for well over 300 bhp, but it now looks as if it's going to be a little less spectacular. Audi has to go one better than the Golf GTi, however, so whilst the S3 will have the same 2.0-litre TFSI direct-injection four-cylinder engine, this unit has been developed for 272bhp. Though to be badged Quattro, it seems that the S3 will also have the same Haldex four-wheel drive system as the GTi. Don't rule out the V6-engined A3, however; just as the Golf range has included a GTi and an R32, an R32-equivalent for Audi could well be on the way, complete with the 300 bhp-plus output. This could well wear the "RS" badge.

With a scheduled launch-date at next year’s Geneva Show, it’s clear the Roadster will mimic the layout of the TT Coupé, and the traditional canvas top will have to do again rather than a folding metal roof. Powered by the same 200- and 250-bhp engines, the Roadster will certainly be one of the fastest soft-top two-seaters around.