It's taken a long time coming, but it'll be worth the wait 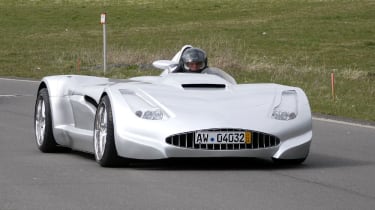 Veritas was a small German company formed towards the end of WWII by three employees of BMW, who wanted a brand to fulfil their dream of building and racing sports cars. Under the Veritas label, they managed to build 75 cars before the company went bust in 1952. Their most famous car is easily the Veritas-BMW Rennsport Spyder, which ran a ‘Hemi’ six-cylinder engine from the late 30’s BMW 328. Fast forward to 2001 and we have the Veritas RS3 concept powered by a 6.0-litre BMW-sourced V12 with around 670 bhp and 760Nm of torque. Featuring design cues from the original cars from more than 50 years back, the RS3 is the perfect evolution of the brand. At one point Veritas moved into the construction of boats, and the RS3 represents that faithfully with its road-going interpretation of a sea vessel. Thanks to its tubular chassis structure, total weight is a lithe 950kg so the manufacturer’s claim of a 350km/h top speed doesn’t seem that unreasonable.

Now, yet another seven years later, a more modern interpretation of the RS3 concept has popped up for testing at the Nurburgring. Unfortunately, however, driver and engineers remained tight-lipped about any details. We can only hope to see the car in production trim at one of the motor shows later this year.