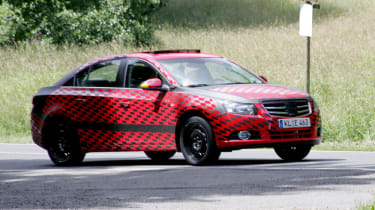 The previous Nubira generation under the Daewoo brand ceased in 2002 and was succeeded by an all new Pininfarina designed model using both, the Lacetti and Nubira names throughout Europe. Then in 2004, GM absorbed all Daewoo models and re-branded them as Chevrolet models, continuing the names originally set by Daewoo. Now, this prototype saloon, caught at the Nürburgring, is believed to be the third generation Nubira, sold in Europe under the roof of Chevrolet.

The prototype shows an all-new, rounded roofline, a more rounded front-end and new headlights that sweep up at the sides, in a style similar to the Nubira’s big brother, the Chevrolet Epica. Also new are the 5-bolt wheels, replacing the 4-bolt wheels used in the prior generation Nubira. The prototype in the photo is also equipped with 4-wheel disc brakes.