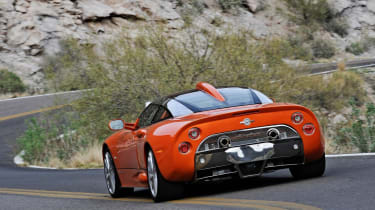 Just days after exiting an eight-month long moratorium, sports carmaker Spyker has confirmed it plans to merge with aircraft builder Volta Volaré to make all-electric vehicles. Spyker declared bankruptcy on the 18th December 2014, but has since paid off creditors and now hopes to partner the US-based electric plane manufacturer.

Though we’re some way off finding out the details of its plans, given Spyker’s previous product range - which included a 400bhp Audi V8 powered C8 and 500bhp VW W12 engined C12 – it seems plausible that the carmaker’s prospective future range of electric sports cars would be angled to rival Tesla. 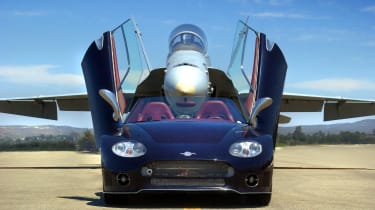 Supporting this prediction is the fact that Volta Volaré currently makes electric motors with as much as 300bhp for its aircraft. Place such a motor into a Spyker sports car, and it could provide enough power to challenge Tesla’s base 324bhp Model S. Add two, and we could be looking at a rival for the 682bhp dual-motor P85D…

‘True to our logo “nulla tenaci invia est via” (for the tenacious no road is impassable) we have persevered and we can now move on and pursue our ambitious goals,’ Spyker’s CEO, Victor R. Muller, announced after his company reopened for business. ‘The company I founded 15 years ago is now set to build sensationally elegant and classy electric motorcars and electric planes for decades to come.’

Since the brand name returned to the industry in its most recent incarnation (back in 2000), Spyker has created some of the world’s most eccentrically styled sports cars. With lavish interiors and curvaceous exteriors – often heavily inspired by aviation – the marque added a unique artistic flair to the automotive world.

Though its products were never quite as technologically advanced as a Porsche or Ferrari, we were big fans of their raw lunacy. David Vivain confirms, after driving the 400bhp C8 back in 2007: ‘The C8 is an odd but curiously intoxicating mixture of fantasy and hardcore. In the sense that it looks and sounds sensational, goes like stink and handles with track-car-aping acuity, it presses all the right supercar buttons.’

Of course, with little more than a confirmation that its debts are clear, there’s no guarantee Spyker will return to making cars. But the prospect of eccentrically styled high-performance electric sports cars, built to rival Tesla and its rapid but arguably generic-looking Model S, has certainly grabbed our attention.