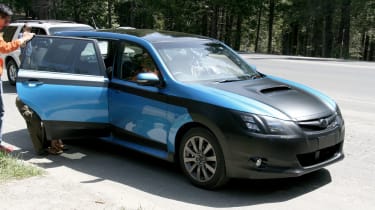 It’s still a month away from the Exiga’s official debut in Japan, but we caught it nearly uncovered in the thick forests of Northern California. Subaru has released a handful of Exiga teasers in the last ten days or so, but none are as detailed as the photos that we've managed to get. Based on the Tokyo Motor Show Concept, the Outback-like wagon will sport seven seats when it debuts in Japan in late June. The Exiga is larger than the current Outback, closer to the size of the Tribeca, although it retains the wagon-like styling of the Outback which leads us to believe that it will either replace or be the basis of the new Outback in 2010.