When rallying addict Henry Catchpole was offered the chance to try Prodrive’s 2009 Group N Impreza, we couldn’t see him for dust 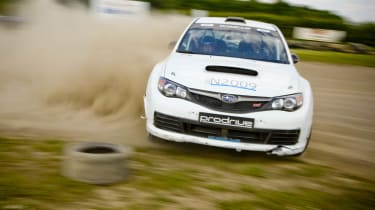 Racing is life. Anything that happens before or after is just waiting.’ So spoke the addict Steve McQueen. And I know what he means. Ever since stepping out of my Suzuki Swift rally car at the end of last year, my life has been missing something. I’ve never done drugs, but the sense of floating euphoria that comes from piloting a rally car is my heroin. The only trouble is that it’s more expensive and harder to come by than any natural opiate…

So when Prodrive asked if I’d like to have a go in their Impreza N2009, nothing could have stopped me from gnawing through the leather straps to get to the Bill Gwynne Rally School. This is a serious step up from my Swift. It’s a £120,000 Group N car, the type of car that runs at the very front of the British Rally Championship and which contests the Production World Rally Championship. It’s the rallying world’s equivalent of an F3000 car.

The Group N regulations aim, but largely fail, to keep the cars close to their road-going equivalents. First the shell is taken back to the bare metal, dipped, painted and seam sealed, then the roof is taken off and a full FIA roll-cage is put in, all of which takes 300 man hours. Meanwhile, the 2-litre flat-four is taken out, stripped down and blueprinted, the turbocharger is replaced with an IHI twin-scroll roller bearing unit with the regulation 32mm restrictor, and then the whole lot is dyno’d for two hours. The gearbox has to remain in the standard casing but the internals are by Hewland. Springs and dampers are changed for three-way adjustable Prodrive-Öhlins items with hydraulic bump-stops. The diffs are plated limited-slips at the front and rear with an electro-mechanical locking one in the centre, which is programmable via a Pectel ECU. Pretty standard road car stuff…

Power is limited to 265bhp, but torque is a whopping 413lb ft (compared with 360bhp but only 383lb ft in an old Group A car). Once I’ve scrambled through the roll-cage and belted myself into the relatively high-set bucket seat, I find the dashboard in front of me is a curious mix of standard Impreza and utilitarian rally-spec switches. But as we chug round to the start of the ‘stage’ I discover that it’s an easy car to drive. Top speed is 144mph but the thing you want to experience is the acceleration off the line. Into first gear, turn the anti-lag on, press the button for launch control until the upshift light flashes. Then floor the throttle, sidestep the clutch and you’re off the line instantly with all four wheels spinning perfectly, catapulting you at the first bend. I’m smiling already.

Then you go for second gear. I’ve known switches with longer throws than this car’s gearlever. You seem to rattle up the ’box too as you use all that torque to thump you along.

It takes about a lap and a half of the short stage to remember what to do, but we’re soon flying, dabbing the brakes early to point the nose in and then carrying speed and sliding through the corner trying to get on the power (something I never had in the Suzuki!) early, riding out the accelerating four-wheel drift. I’m in driving nirvana.

None other than Andreas Mikkelsen – protégé of Marcus Grönholm and the youngest driver to ever score points in a WRC event – is also along to test the car (no pressure) and after he’s made some changes (lower the front 10mm and the rear 5mm, with a new map for the diff) it’s even more fun. The nose flicks in more easily, which I like, and although the tail slides more, it’s easy to catch, and half the fun is oversteering into, all the way through and then out of a corner. What a perfect day.

It’s all over much too soon, of course, but the memories of it still make me smile even as I write this. Prodrive were happy with what they saw too and there are now plans afoot… Anyone fancy seeing their company’s logo on the side of a rally car?