0-60mph in 3.7sec. That got your attention? More details on Subaru's Cosworth have surfaced 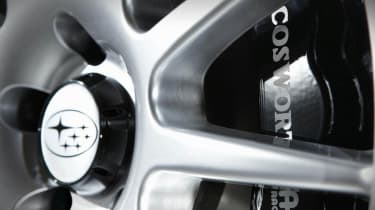 Although details of the Cosworth tuned Subaru Impreza are scarce, further news has surfaced of the hotly anticipated new Cossie.

Officially called the Cosworth Impreza STi CS400 the new car will go on sale in June via Subaru dealerships and has been breathed on to liberate an additional 99bhp over the standard WRX STi. The CS400 is expected to shave 1.5 seconds off the Impreza’s 0-62mph time which drops to a tasty sounding 3.7 seconds.

More teaser pictures have been released and show the uprated AP Racing six-pot callipers and 355mm front discs the Cosworth STi will run meaning stopping power should be a match for the acceleration. Cosworth have also made further upgrades to the suspension and exhaust packages along with changes to the exterior and interior styling.

Just 75 STi CS400’s will be produced with pricing and technical specification expected to be announced closer to the on-sale date.See how the Ford Escort Cosworth fares against Focus RSWe put the Impreza WRX STI against Lamborghini GallardoFollow evo on Twitter and Facebook for car news and views